To be fair, there isn't much to talk about, but the last post was made almost 20 days ago.

If you have any sort of idea, make a fanpost about it or something. SBNation has said if the blog becomes inactive they'll probably do away with it, and that would suck. There's still plenty of stuff to write about. After the jump, I've plenty of Georgian hockey that's fit to be written about. 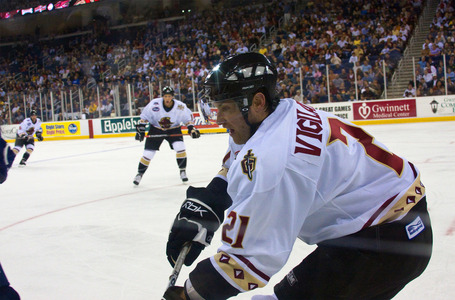 The Gladiators aren't unknown in the Georgia hockey landscape- since 2003, the Glads were the Atlanta Thrashers' East Coast Hockey League affiliate until the Thrash's move to Winnipeg in 2011. While independent as of this writing, there's a lot of speculation that the Glads will announce an affiliation with the Nashville Predators. Though the Gladiators have never had a laundry list of notable players, there are a good amount of players with NHL credentials that have worn the gold, maroon and black. Heck, even Phil Esposito (no, not that Esposito) had a cup of coffee with the team's previous incarnation with the Mobile Mysticks! 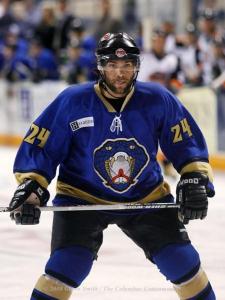 Founded in 1996 and originally in the Central Hockey League, the Cottonmouths have enjoyed a relatively successful existence, having won championships in both the CHL (1998) and the Southern Professional Hockey League (2005). A 3-year stint in the ECHL proved unsuccessful for the Snakes, but the city of Columbus, Georgia has embraced the team playing out of the 10,000 seat Columbus Civic Center. The Cottonmouths made hockey headlines in early March with their specialty Fight Night jerseys to promote UFC slugger Josh Koscheck. Unfortunately for this team, to create the jersey they most likely hired the people responsible for this. 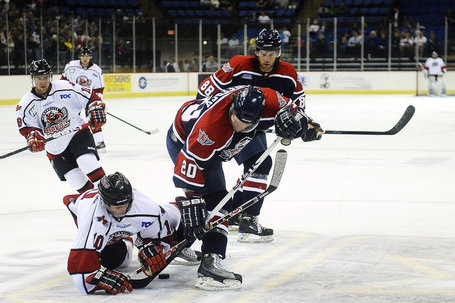 The new kids on the block, the Riverhawks assumed the role of cross-state rivals for the Cottonmouths in 2010. Hockey in Augusta isn't new, as the ECHL's Lynx played from 1998 to 2008. After a two-year absence, the city better known for golf added a team in the Southern Professional Hockey League, and started with a bang best reserved for supernovas - in its inaugural season, the Riverhawks not only had an eleven-game winning streak, but finished 2nd in the league and made a post-season run that most teams can only dream of. Reaching the SPHL finals, the 9.1k seat arena was filled to the brim; unfortunately, the Riverhawks fell in 3 straight games to the Mississippi Surge. With League MVP Matt Aufey, coach of the year Brad Ross and various other accolades, the fledgling franchise has already jumped in front of the southern minor league spotlight.