If you had asked me what Alex Burmistrov's rookie season would look like, I would not have described what actually happened. 6 goals, 14 assists playing much of the season with guys like Nik Antropov (coming back from injury), Ben Eager, Chris Thorburn, and Eric Boulton? Didn't see it coming.

Of course, it also didn't seem likely that Burmistrov would win and keep a top-6 role this season. Center is not the easiest position to play in the NHL and he would have had to leapfrog Bryan Little and Rich Peverley to win a spot. That wasn't going to happen.

The question then becomes: was it worth keeping Alex up in the bigs? Should he have gone back to juniors where he would have had more ice time and more time to put on weight before a season in the NHL? I doubt we'll reach any sort of consensus on these questions, but let's take a look at some of his numbers.

I think it's pretty clear that Burmistrov has some skills. He's got a decent shot (but he doesn't use it enough.) He's extremely shifty (but he sometimes tries to do too much.) He doesn't mind throwing his body around and mixing it up (but he won't always have Eager or Thorburn around to protect him.) For much of the season, Alex was roughly even in the plus-minus department, but he saw a huge drop at the end of the year. Here's your graph: 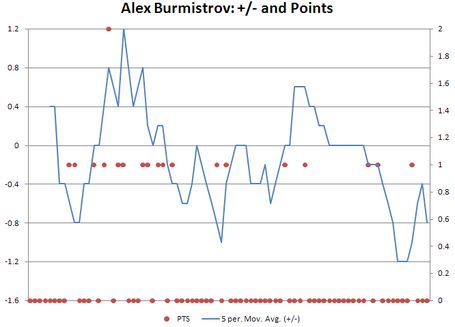 After scoring 13 points in the first 30 games of the season, Alex picked up just 7 over the remaining 44. Worse, he didn't get his first NHL point until game 9, so he technically went on a stretch of 13 points in 22 games. That'd be an 82-game pace of 49 points. His 82-game pace based on his production in the final 44 comes out to just 13 points, or 27% the rate of the prior period. [To math nerds: yes, I realize by eschewing the first 8 games, this makes the numbers look even more polarizing. That's part of the point, though: he quickly ramped up to a very hot pace and then cooled WAY off.]

Why did Alex's production take such a tumble? I'm sure a large part of it was his move to the 4th line, but I think there must be more to it than that. Here's another chart for you: 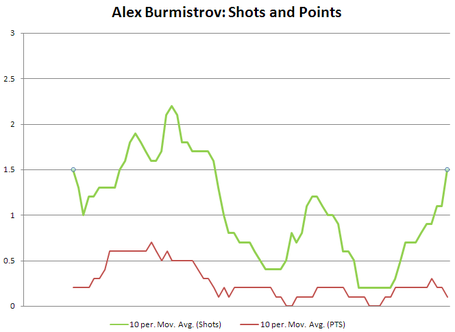 What was the difference between the part of the season where he was scoring points and the part where he wasn't? Well, I'm not suggesting there's causality here, but it's pretty clear that Alex was much more successful when he was shooting more. That should be obvious, right? Those things go together? When you're having success, you tend to shoot more, but if you're not playing well, you tend not to shoot as much?

If I were Coach Ramsay, I would have been telling Alex to shoot more, shoot more, shoot more. He seems to have success whenever he's shooting more than once per game on average. Sadly, that was really only the first 30-35 games of the season. I usually try not to speculate, but I'd guess that the wear and tear of the NHL season caught up to Alex and his play suffered as a result.

I anticipate that Alex will play a much larger role next season. Barring an off-season acquisition or trade that brings in a top-6 forward, I'd pencil him in between Evander Kane and Nik Antropov on the 2nd line. If Nik comes back healthy, it could be a dangerous combination.