Share All sharing options for: Bryan Little: Don't Call it a Comeback

Bryan Little's first full year in the NHL was unbelievable. He scored 31 goals (along with 20 assists) playing a significant portion of the year with Ilya Kovalchuk. His follow-up? A disappointing 13 goals, 21 assists playing with Todd White and Slava Kozlov. That wasn't quite what we'd hoped for.

The difference between those two years seemed to be two-fold: his power-play points dropped significantly (from 12 goals, 8 assists to 3 goals, 3 assists) and he was playing with two aging veterans who were both having bad years.

Little was a player whose season should have been marked with a gigantic asterisk that read "* Wait for next season to make judgement." Now that we've had another season, let's judge...

Bryan Little impressed me this year. In fact, he was one of my favorite Thrashers and he's not at all like my usual favorite players. (I tend to appreciate the Rick Dudley type of player: bigger body, likes to mix it up, etc.) Bryan's +11 blew away every other player who played 60 or more games. The next closest was Ron Hainsey at a +3. (Brent Sopel was a very solid +7 in 59 games and deserves an honorable mention.)

Bryan didn't get close to his 31 goal season, but I feel like we saw the makings of a perennial 20-goal scorer. Had he played a full 82 games, there's a reasonable chance he would have hit 20 goals, 50 points, or both. Here's a look at his season on the whole: 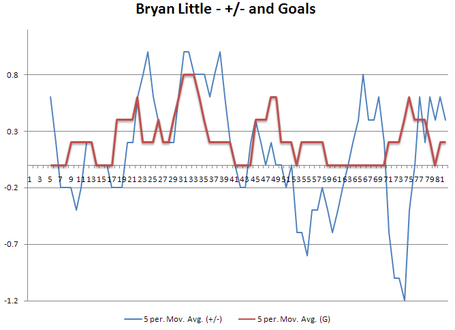 As you'd expect, Bryan's best numbers came when the team was playing well in November and December. Unexpectedly, the worst point of his plus-minus numbers came late in the season when he was playing with Blake Wheeler and Andrew Ladd during a spike in his goals. That's somewhat counter-intuitive: you'd expect that his plus-minus would improve when his points spiked. In fact, during the period just before that (games in the 60s) you can see a continued goalless drought during which he had pretty solid plus-minus.

This is an important point: for some players, plus-minus doesn't necessarily follow their points. Sometimes guys play solid defense and just don't have much luck picking up points. It's a sign of a good team if they can be in a rut and still maintain a positive plus-minus.

Bryan Little exemplifies many of the characteristics I love to see in hockey players: he works hard, he's a solid skater, he never takes a shift off. He's got a great shot and fantastic vision. He'll almost certainly continue to play with Andrew Ladd and Blake Wheeler next season and I expect great things. (I'd say he's got a shot at 20-25 goals and 40-50 assists.) Little still has two years left on his contract and I can't imagine a situation in which we'd trade him. Feel free to pick up a Little sweater this offseason and plan to wear it proudly next year.

There are things Bryan's going to have to work on to really be considered a top line center in the NHL. He's going to have to improve on his 46.3% faceoff win percentage. Despite taking the fifth most shots among Thrashers, I'd love to see him shoot a bit more too. He takes about two shots per game, but pushing that up to 2.5 (Andrew Ladd levels) or 3 (Evander Kane levels) would probably lead to a lot more goals. Of course, not hitting the post twice a game would mean more goals as well...