Share All sharing options for: Zach Bogosian: What Happened?

Now that the season has concluded, I thought it might be useful to take a look at each Thrasher individually. The idea is to pull together a few stats (and maybe a chart or two) and let you guys comment on each guy, one at a time. Rather than choose my own order for players, I decided it'd be fun to ask for suggestions on Twitter. Well, the first three responses all came back "Zach Bogosian," so I guess I got my answer. (Feel free to continue to make requests, either on Twitter or in the comments here.

Again, like anything else, I'll try to mix stats with some opinion. I imagine Zach will be one of, if not the, most contentious posts, so let's get this out of the way...

Zach has been called everything from the worst player on the team to the Thrashers' top defenseman. The truth is (probably) somewhere in between, but I think he's been both at different points in the season. That -27 is absolutely galling, but I wonder: had he scored 15g 50a and been a -27, would the reaction have been as strong?

Hear me out: our expectation is that Zach produce offensively. That wasn't there most of the year, and it didn't help that his defense was pretty poor. Still, Zach was given a large number of defensive zone starts (47.9% of starts in the offensive zone, one of the lowest on the team) and was typically playing against the toughest competition every night (toughest competition of all defensemen who played 20 games or more). Yes, he handled it poorly, but it should be said: had Zach been coddled like Byfuglien or Enstrom, his numbers likely would have been much better.

A few people were hooting and hollering after Zach said this to the AJC's Chris Vivlamore:

Obviously getting hurt three games into the season wasn’t the best thing for me. After that I thought I had a pretty good second half.

How could a guy who finished -27 have a "pretty good second half?" Well, I figured I'd make a chart and let you decide for yourself. Two metrics for an offensive defenseman like Zach: +/- and points: 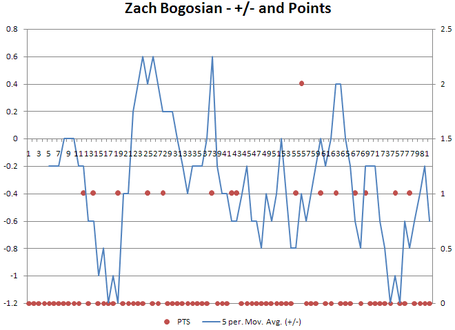 There's a pretty clear dip at the beginning of the season which likely had a lot to do with his injury. As the team played well in November and December, Zach's plus-minus picked up and was looking decent (though unspectacular.) His points were pretty inconsistent, but starting around midseason, he did start to score with more regularity. His plus-minus took another nose-dive with the team's end-of-the-year slump.

It seems to me that Zach's stats show high sensitivity to the team's play as a whole: when the team was playing well, so was he. When they were playing poorly, he was playing very poorly. If you take the "young defensemen are inconsistent and usually not game-changers" view, as I do, you can probably expect that as the team grows and Zach matures, his play will improve. If not, you should be concerned.

Another comment on the offensive side of things: beyond Tobias Enstrom and Dustin Byfuglien, the other Thrashers defensemen all seemed to pick up points at roughly the same rate. Playing at 5-on-5, here's the points/60 minutes for the squad:

As far as even-strength goals/60m go, Zach was behind Byfuglien and Meyer but tied with Enstrom. When I pulled up stats for this post, I was actually surprised that his numbers didn't look as bad as I thought they would.

Zach is a restricted free agent and will almost certainly return to the Thrashers next year. While there is some risk in keeping him (if this season's poor play was not a fluke), Bogosian is very much considered a core piece of this team. He fits Dudley's wish list of player attributes pretty well (good skater, likes to hit, bigger body, etc).

Sadly, I don't have an answer to the question "what happened?" I think Zach got a slow start due to injury and had a couple bad slumps, the cause of which none of us will ever be able to figure out. I don't think it's a skill issue. It could be a conditioning issue, though I highly doubt it. It could be a mental issue, but there's no way to verify it. I think we'll start to get a better idea of Zach's potential next year. If he can put this rather rough season behind him, he could still be a top defender on our squad for a long time to come.