Blueland Loses One Of The First Thrasher Faithful

Share All sharing options for: Blueland Loses One Of The First Thrasher Faithful 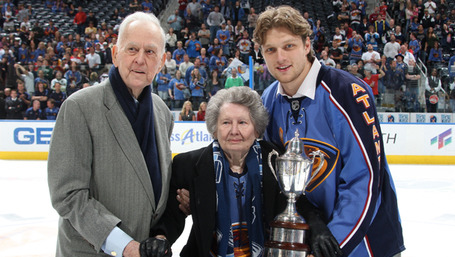 Tonight's game against the New Jersey Devils will have a somber tone to it. Mr. T.R. Benning, season ticket holder from the first day that they went on sale for the franchise, passed away today. He was 89. For those of you who the name doesn't ring a bell for, he was the elderly gentleman who appeared on the kiss cam with his wife, Maria. The couple were awarded the 7th Man Award last season for their continued support of the team, but they were more notable for giving the young couples in the crowd something to aspire to.

Ben over on the Blueland Blog has a post up regarding Mr. Benning's passing. He was the founder of the Benning Construction Company, as well as a World War II veteran who stormed the beaches at Normandy.