Share All sharing options for: Gameday: Flames at Thrashers

This story will double as a gameday thread and a place for me to make a point. I've got a couple charts for you guys based on a comment I saw that got me thinking...

if you break our performances, or lack there of, into pk, es, pp, and goaltending components, slater would be a key loss in the pk, which continues to struggle without him. getting him back won’t help pp at all, but will definitely improve the pk and give a slight boost to es.

That's our very own dennylambert!! - who I seem to disagree with rather often - talking about something I can show in charts! Yay, charts! There's two things I want to say before the charts:

I have two charts for you - one shows goals scored at even strength and on the power play, the other shows goals allowed in both situations. These numbers are a 10-game moving average, so they slightly lag the actual performance. 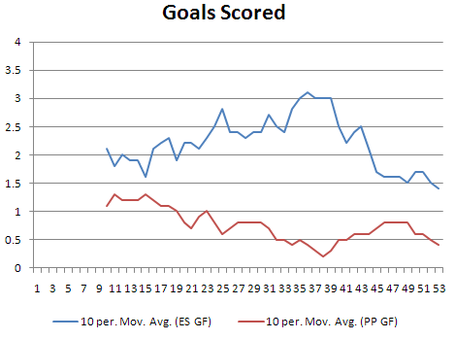 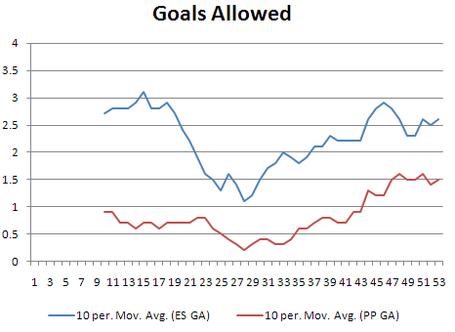 Okay, so let's talk about these. (Note to chart-lovers: these are not stacked charts.)

The Power Play: [Red line, top chart.] There's not a huge trend here. It started off pretty well, but after 10-12 games (remember the line lags) it dropped. It continued dropping for awhile. The power play has really just gotten continually worse until around the mid-30s where it saw a small boost.

Scoring at Even Strength: [Blue line, top chart.] This started off not-so-great - you want to score more than 2 ES goals/game - but steadily got better. This was something I had pointed out a few times while we were winning a lot: the team wasn't playing great at even strength, we were just getting some great goaltending and getting lucky. Over time, though, there was quite a bit of improvement... until around the mid-30s. I often point to the 7-1 victory over New Jersey as the turning point. That was game 34. Game 35 was our 6-3 win over Toronto. We had 7 and 5 ES goals in those games, respectively. Since then, we've scored 3 even strength goals just twice in 18 games and less than two in 10 of 18. That's not going to cut it. Our scoring at even-strength has gotten bad.

Penalty Kill: [Red line, bottom chart.] Special teams don't matter. I say it all the time: it comes down to even-strength. That's true 90% of the time. It sure looks like the PK matters here, doesn't it? A HUGE jump since game 25 or so. A really truly incredible increase in the number of PP goals we allow... except we see exactly the same trend with the even-strength line. Which brings us to...

Special teams is a problem, but the problem isn't special teams. It's everything. This team started off playing decently, but at the end of November, we started giving up more goals. Midway through December, we stopped scoring as many goals. These two things combined? Losing, plain and simple. Denny was right that losing Slater hurt the PK, but this appears to be a team problem. Slater's loss wouldn't cause such a huge change in the even strength GA numbers if that were a major factor.

I don't know that I an answer or a fix, but hopefully that serves as a useful bit of diagnosis.