Second Verse, Same as the First?

Share All sharing options for: Second Verse, Same as the First?

...then along rolls December to crush our hopes and dreams?

I thought it was interesting enough of a theory to graph. The charts are below with some commentary.

This first chart shows the total number of points as the season progresses. This isn't my favorite view of the data, but I still think it's instructive. 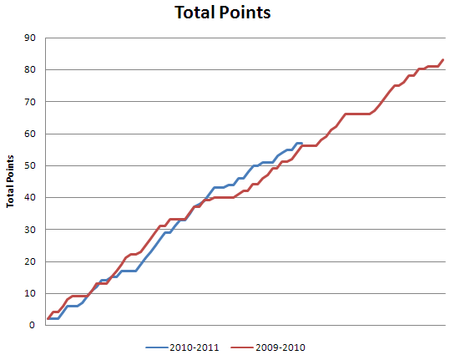 Some of that same information can be picked up a little easier from this next chart. This one shows the 10-game moving average of the standings points per game. Said another way, this is like keeping an eye on the Last 10 Games stat for points. If this number stays above 1, you're in pretty good shape. When it dips below, that's trouble. 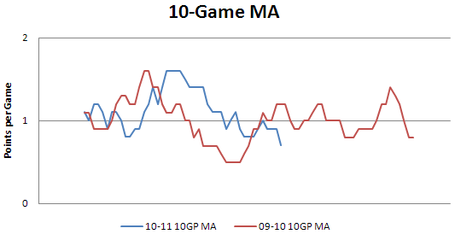 The interesting thing here is the very similar drop in performance between the two years with the drop this year coming several games later into the season. Luckily, it's not been as deep of a slide, but it's still been considerable. The important takeaway here: as bad as the Thrashers seem right now, they've not fallen nearly as badly as last year. That's the reason we're still in a playoff spot, and it's the reason there's still at least some hope.

That said, this line shows no signs of turning up yet. Last season's slump, at this point, had already shot back up to the 1 point-per-game level (and stayed there roughly the rest of the season.) The Thrashers will need to get that line above 1.0 very quickly and hold it around 1.2 - 1.3 if they hope to make the playoffs.

If this season's felt an awful lot like last season to you, take heart: you're right.