In the last Five Game Report Card, I pointed out that the Thrashers' 5-on-5 GF/GA was looking okay, so I was still a bit hopeful about this season. Let me share with you a different stat that makes me much less hopeful. Let's do this one in a chart. 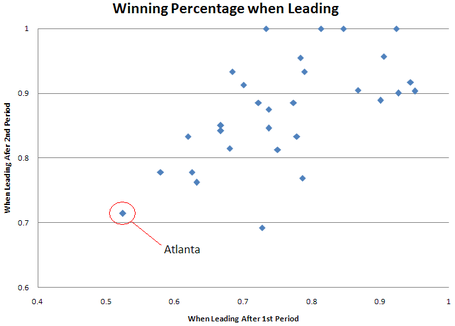 What does this mean? Teams that can hold leads are not necessarily the best teams. (Scoring first is a much better indicator of a winning team than the ability to hold a lead, for example.) Bad teams might be able to hold a lead and just don't get them very often. Still, "we win about half the games in which we lead after the first" is not exactly the kind of message we'd like to deliver. Worse is this: