Share All sharing options for: Gameday: Thrashers at Panthers

Hello from Montreal! I'm up here for work writing this from my hotel a whopping 2 blocks from Centre Bell. While I'd love to see the Canadiens play the Flames tonight, I'd rather not blow my budget open any bigger than my food and alcohol bill already has. (It's REALLY expensive to eat in Montreal.) I probably won't be able to catch this game live, but I hope you guys enjoy it.

My gameday thread is going to point out just one thing: I disagree with Craig Ramsay.

This is not something I want. I think Coach is an incredibly smart, perceptive guy, but I've got to disagree with something I saw him say in the AJC. Here's his comment followed by my graph. You can make up your own mind...

It’s vital in the world these days to score goals. As much as we have given up too many, we’ve played pretty well. You need to get ahead. You need to score some more. That was a hallmark of our team halfway through the season was that we did score. Now, we are not scoring quite as much. It puts a lot of pressure on your defensive play. We want to continue to emphasize that everyone has to be involved up ice.

Craig Ramsay in the AJC 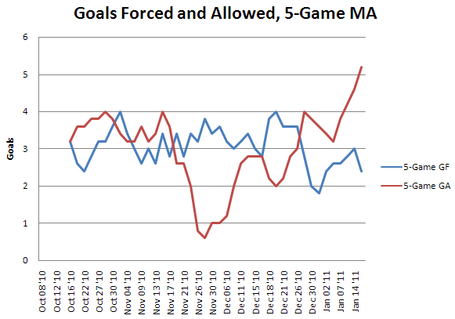 I'm no rocket scientist (just a computer engineer), but it sure looks like - while our goals forced have fallen - our goals against have skyrocketed. Since late November, when this team was playing its best, we're scoring maybe a goal per game less, but we're giving up 3-4 goals/game more. We've gotten blown out in a few recent games, so the GA does look particularly bad, but if there's a pattern here, it seems to be that we're allowing more and more goals. The dip in goals scored looks like that: just a small dip.

The mid-November dip in GA is almost entirely due to the goaltending clinic of Ondrej Pavelec. I had cautioned back on December 13th in my Five Game Report Card...

Despite the 3-2 record over these five games, the Thrashers started to look a little more vulnerable. Ondrej Pavelec's invincibility seemed to fade and the Thrashers allowed 14 goals (compared to just 4 in the last series). Still, a sub-3.00 GAA should be sufficient for the Thrashers to continue winning games.

And then again on December 28th...

I am most concerned about Ondrej Pavelec. He is no longer playing superhuman (or like a top-5 goalie in the NHL) and the team has not picked up the slack. No goalie can play invincibly over the entire season, but the best teams step up when their goaltender is in a bit of a funk. The Thrashers have, as best as I can tell, not done that. The question then becomes: can they?

I think you can see both of those turning points in the numbers.

What is the cause of the Thrashers' recent slide?

This poll is closed