Share All sharing options for: Best Things of the Week: Jan 3-9

Hey, thanks, snow day! Seriously, I've had the last two *that close* to being ready to go, but just couldn't cross the t's and dot the... lower case j's. No really, I did. Honest.

Nic must've heard about the trade rumours, because he's stepped it up over the last four games, 2 goals, 2 assists, including this good-looking goal from Sunday versus the carolina Hurricanes:

What should the Thrashers look for in return for Bergie? Timmy wants pickspickspickspicks, but I'd like to see another faceoff guy to support Rich Peverley. Whatever the return, I think we can all agree it's a good thing it wasn't Jamie Langenbrunner.

3. Seventh Place, Four Points Out Of First in the SE.

Regardless of how things seem right this minute, if you're a Thrashers fan, you should be thankful for where the Thrashers are right now. And hey, at least we're not Devils fans.

If you'd have asked anyone that viewed last season's Stanley Cup Playoffs what award Dustin Byfuglien would be even mentioned for this season, Norris Trophy probably would not have been at the top. Then Rick Dudley stepped in, Byfuglien changed teams, changed positions, Jeremy Roenick shot his mouth off, and voila, the hype begins. Now, regardless of where you may fall on the "Only defensive defensmen should be considered for Norris!" statement, all of this Buff-For-Norris talk is only good for the Thrashers. Having a viable major award candidate on the roster is another step toward legitimacy, a journey already begun by the Dudley-Ramsay tandem. (Quick sidebar, re: Norris Trophy debate - Matt Barr has written a pretty thoughtful piece over at his fantastic blog, Thrashable. It is highly edifying and very worth your time) But don't look now, because Michael Farber at SI.com has other Thrashers in awards talk, like Craig Ramsay for Jack Adams, Ondrej Pavelec for Vezina, and Buff for Hart Trophy.

Jim Slater was on pace for a career high in points, but is currently sidelined with a concussion. Evander Kane had no sooner matched his rookie year point totals, and then falls to the ubiquitous "lower body injury." Ben Eager fell to a lethal dose of (what I can only assume to be) fatigue and Colby Armstrong's yapping gob, and suffered a massive lapse in judgment. This five day break could not have come at a better time. My guess is that the schedule-wizards proceed alphabetically this season, because only Anaheim has played as many games as the Thrashers have (45, to date). Rest up boys, those rowdy Flyers are coming to visit this Friday. Oh, how we love them... 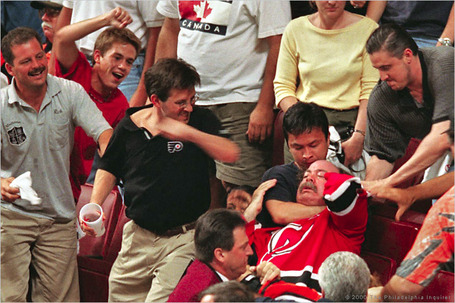