We scour the intertubes for hockey blather so you don't have to. Some season previews (which are about as accurate as you can get without having seen a particular iteration of a given team actually, y'know, skate together), and other assorted stuff.

East: Which playoff misses could turn into hits? - NHL.com
NHL.com picks apart the also-rans from last season, and which teams could make this years' postseason. SPOILER ALERT! Just like tee ball, EVERYBODY has a chance!

30 in 30: Revamped Thrashers have look of an improved team - NHL.com
Another season preview, this one from NHL.com consigliere Rocky Bonanno.

LATE ADD: Hockey never sleeps and more things I learned this busy summer - SI.com
Darren Eliot with some salient thoughts on Brendan Shanahan, Ilya Kovalchuk & others. Am I the only one that wouldn't mind seeing Shanny as commissioner one day?

A look at what’s left of NHL free agency | Posted Sports | National Post
If you've never read Down Goes Brown, you owe it to yourself to check it out. A little Leafs-centric, but when you're writing hockey jokes, that can only be a plus. Now it seems DGB (AKA Sean McIndoe) has hit the big time, writing for the National Post. Please note the first comment under this particular entry.

And finally - I was watching Ben Wright's video interview with new Thrashers netminder Chris Mason, and was siezed by a sudden urge to hide under my bed crying. Imagine this mug staring at you from behind a goalie cage: 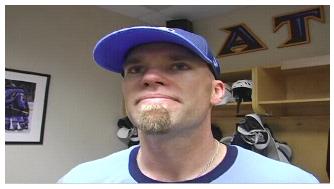