Can we all agree to stop predicting how many goals the Thrashers will score this year? Even our very own Mr. The Falconer did it awhile back, and while he at least attempted to adjust the numbers (by using ice time rates and redistributing time). I'll give him credit for also admitting that his projection would be wrong, but if we know something will be wrong, why spend the time writing a blog?

I know this comes from a good place. After the loss of superstar winger Ilya Kovalchuk, the Thrashers' goal production dropped somewhat dramatically, from 2.95G/game with Kovalchuk to 2.52G/game without him. That's a substantial drop. Now, the goals against also dropped (from 3.13GA/game to 2.89GA/game), so that helped soften the blow, but the team still took a substantial hit.

Here's the problem: we were running what was supposed to be a high-powered offense without our highest-powered offensive player. The other guys we expected to be impact offensive players weren't helping much: Slava Kozlov was scratched most nights and Maxim Afinogenov scored just 6 goals in the 27 post-Kovalchuk games to end the season. (That's an 82-game pace of 18 goals.) For comparison, during this stretch Bryan Little had 5, Nik Antropov had 11, and Niclas Bergfors had 8.

The big problem I have with all these posts - and the one I linked above is certainly not the only one - is that they consist of nothing but pointless conjecture. You do not predict goals like this:

We are bringing in an entirely new coaching staff with a different set of systems. Different style of play means certain players will see their goals go up and others will see their goals go down. Example: look at Maxim Afinogenov with us last year and compare that to his time in Buffalo. There's really not an easy way to predict who will mesh best with Rammer's systems.
But wait, there's more! Our team is full of young players. Young players tend to be more inconsistent. Some of them may grow slowly, others quickly. Evander Kane had 14 goals last season, but he could do anything this season. Steven Stamkos had 23 goals in his first season and 51 in his second season. Patrick Kane has increased his goal totals more slowly: 21, then 25, then 30. Kane could score 20... or 30... or 15... or 10. It's nearly impossible to predict.
Furthermore, the addition of guys like Byfuglien and Ladd makes the numbers even more difficult. Why on earth should we start with their numbers from last season in Chicago? Both guys should have a bigger role here in Atlanta.
(Side note: and why count assists? Both of the posts I linked used assists in the analysis. In the case of Rawhide, he looked at assists as a standalone element and The Falconer did his numbers on total points. Boys, correct me if I'm wrong, but a goal's a goal with or without any assists. And games are won based on goals. So what's the point?)
Even more important and just as overlooked? We might have scored less goals at the end of the season without Kovalchuk, but we were winning games at the same rate. If both goals scored and goals allowed fall, which is probably a safe assumption for this season, anything could happen. Even if we knew with absolute certainty how many goals the Thrashers would score this season, it'd be very very difficult to predict whether or not they'll make the playoffs. And we can prove this: 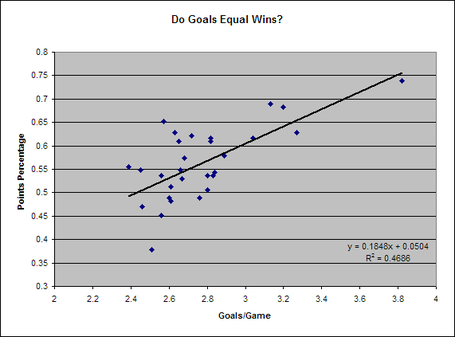 Yes, it's better to score more goals than less goals, but that's some pretty messy data. For my statistics nerds out there, the R-squared is 0.4686. Not too hot. For my non-statistics nerds, the graph above shows that, while scoring more goals can help a team perform better, it's not a dominant factor. There are other, better things to predict how a team will do. For example, Goals For/Goals Against. The R-squared number is a rough indicator of how well your two things are related: in this case, how much of a team's winning can be explained by the number of goals scored? You can think of this like a percentage, if you like: 47% of a team's winning can be explained by their goal-scoring. For 5v5 GF/GA, it's 75% (R-squared .7481). Goals allowed even beats goals forced at 0.5117 (or 51%).
So please: let's try to sit tight for a bit until we have some actual data.