From the Department of Obvious Statements: The Draft Matters

Share All sharing options for: From the Department of Obvious Statements: The Draft Matters

Hey guys, long time no see! I was taking a bit of time off - you would be surprised at how much work this hockey blogging stuff is! - but figured I'd chime in with a few thoughts on the draft before the draft.

I'll warn you right now: if you're a regular reader of Bird Watchers Anonymous, nothing in this post should be surprising. I've always tried to get across to folks that the draft matters quite a bit and resident expert Mr. Falconer does the same. I know many of you are convinced that poor drafting is to blame for the current state of our team, and while I don't necessarily agree, I see your point. (I'm more persuaded that the Heatley incident and our failure to resign Marc Savard are the true culprits.)

As a slightly further side note which I never got around to making in the comments: folks typically point to our failure to pick up solid players outside of the first round as proof positive we're poor drafters and with the wave of a hand suggest that's the problem with our team. I'm not convinced. Presented to you, as evidence, a list of players drafted from the 1999-2009 [note: originally posted as "1995," the tables below represent 99-09] Drafts who were taken outside the first round but played more than 82 games at the NHL level. I'm picking some of the "cream of the crop" teams and tossing us in there as well...

Now, I'm not suggesting the Thrashers are great drafters, and I think the data bears out the supremacy of teams like Chicago, Detroit, and New Jersey. The best teams get around 1 player who plays at least a season in the NHL outside of the first round. The Thrashers have been getting about half of that...

...on the other hand, Ondrej Pavelec will almost certainly join the list next season. Spencer Machacek, Arturs Kulda, and Paul Postma are all expected to play in the NHL. There's high likelihood that Jeremy Morin and Carl Klingberg will play in the NHL. While the other teams above will also likely add a few guys to their lists, we've got a pretty solid stock of outside-of-the-first-round talent.

The problem is the hit-rate: even the best teams get a future NHLer just about 15-20% of the time. While solid scouting and a strong player development program can increase the percentage, it's rare for teams to be able to build a team around late-round talent. Most teams are stuck building around the much-more-likely-to-succeed first round picks.

So while I keep saying that the draft matters, that requires something of an important side-note: the first round of the draft matters most, especially when it comes to elite players. Let's look at some charts. Below is a pie chart showing how teams acquired players who scored at least 70 points this season. (Conveniently, it's exactly 30 players. Note that this is not "the top player on each team," but rather the top 30 scorers in the NHL.) 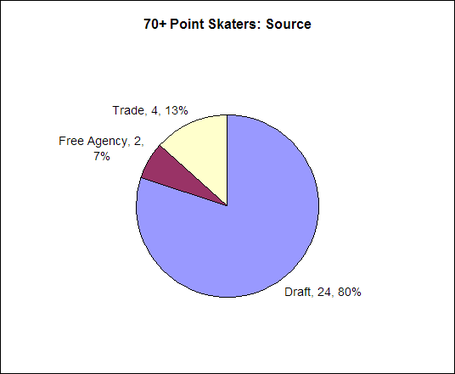 80% of the players were drafted by the team for whom they currently play. Just two were signed in free agency: Martin St. Louis and Marian Gaborik. Four were acquired by trade, and two of those four were drafted by the Thrashers! (Ilya Kovalchuk, Dany Heatley, Brad Richards, Joe Thornton) When I say "the draft matters," this is what I mean: the top players in the league overwhelmingly play for the team which drafted them. [There's a variety of reasons for this for which you're welcome to speculate in the comments.]

Perhaps more interesting is the result you get if you look closer at that big Draft slice. If 80% of the players came from the draft, how many were first round selections? Quite a few, actually. 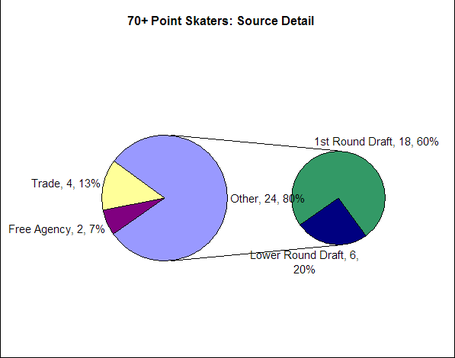 Ah ha! A 70-point scorer is three times as likely to come from the first round as he is the rest of the rounds combined. [This holds up if you look at the Trade/FA group as well. Of those 6 skaters, 4 were first rounders.] As it turns out, most scouts for NHL teams are pretty good. If there's elite talent out there, there's a very, very good chance that player will be drafted in the first round. Sure, there's a few Datsyuks and Zetterbergs who end up being great players from late rounds, but they are outliers. There's just a few from each draft class of hundreds of low-round picks.

So what does this mean for the Thrashers? Well, in a draft where we have two first round picks, I'm highly unlikely to suggest we trade either of them away. In fact, I'd even consider moving assets we already have for an additional first-rounder in this year's solid draft class, perhaps moving up our 2nd-round pick by tossing in a pick next year.

Over the next few weeks, we'll be releasing some updated rankings of Thrashers prospects. (We'll probably update them again after the draft, likely after prospect camp.) I'll chime in sometime soon with a post discussing our needs and goals for the draft. Oh, and don't forget, our very own The Falconer will be heading to LA and reporting back live. Stay tuned.