Share All sharing options for: Jack Campbell Meets the Press

The other player I spoke with at the Pre-Draft Media Availability is Jack Canmpbell who played a starring role for Team USA squads that won the Under-18 tournament and the (Under-20) World Junior Tournament in the last two years. Some scouts are calling Campbell the "best big game goalie" in years because of his performance in tournament championships. Jack was very genuine and enthusiastic during his press availability, it was easy to see why he would be popular with his teammates. 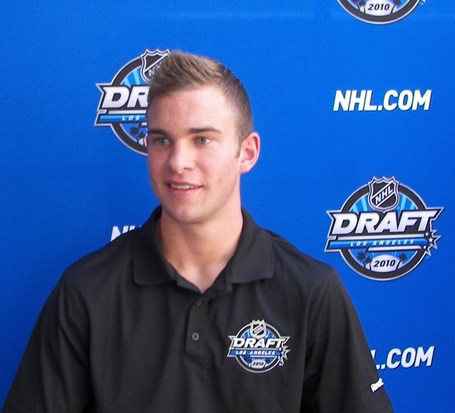 Media Question: Scouts have talked about your commitment to the game, can you talk more about that?

Jack Campbell: I just think it is my love for the game. I go to the rink every day with a smile on my face and I'm ready to work hard. I love spending time at the rink and watching film. I'm always trying to get better and build comaraderie with my teammates--I love being at the rink.

Q: Jason Zucker talked about staying 30 minutes late after every practice, is that what you're talking about?

JC: Not every practice because many times we had to go upstairs and lift [weights], but any extra ice we can get we go out there and he will shoot on me, or we go to the weight room and do extra sprints, extra lifts, extra film, whatever it is that will better ourselves and the team.

Q: You seem to have great composure under pressure, how does this happen?

JC:  I love pressure and having that spotlight on me. Being a goalie you have to deal with pressure, maybe more than other positions. It is great to be in those moments. Nothing like having 50,000 Canadian fans screaming at you--it's great!

Q: Scouts talk about your aggressiveness. Is that just part of your personality, or something you work on?

JC: I think it is my personality--wanting the puck so bad--I go out and try to cut down the angle.

BWA: At the WJC what was your thought process as you started that game on the bench and then got on the ice in relief?

JC: I was a little disappointed that I didn't get to start any of the games in the playoff round, but I worked hard in practice and was a good teammate. Mike got us to that final game and when the team needed me to step up my preparation really paid off and I had some success.

Q: You've said you want to make the NHL as quick as possible, what would be a timetable for you?

JC: It is up the organization that drafts me of course. My goal is to be in there right away. I've been writing goals on my wall since I was eleven years old and the only one I haven't accomplished was not winning the Under-17 Challenge last year. I'm going to continue to shoot for the stars and hopefully my hard work will pay off.

JC: Yes, the Under-17Challenge, we were lost to [Team] Pacific and I really learned from that. I was too focused on beating [Team] Ontario in the Finals and I sorta of forgot I had to win the semi-finals game.

BWA: Can you talk about your choice to play for the US National Development team? Did you have other options on the table?

JC: Yes, the other option was the OHL. But I really wanted to be in that USA uniform since I was 14 years old, so I knew which [route] I would take if I made Team USA.

Q: What went into your decision to go to Windsor in the OHL next year?

JC: There were quite a few: the number of games, the NHL-style playoffs, playing for Coach Boughner and Mr. Rychel--they know what it takes to get to that next level--and then the [quality of] the team we're going to have next year. Some great teammates, we're going to have a lot of fun. Also the community, it will be a lot of fun to play in that atmosphere.

BWA: Can you talk about your teammates on the USNDT? You spend a lot of time in practice and most goalies have that one teammate who gives them a rough time, anyone like that on your team?

JC: One of my best friends on the team Bryan Ross. He's a really solid player and he should go high in the draft. We also kid around on the ice and for some reason he always has more number more than anyone else--it drives me crazy.

Q: How many interviews have you had?

JC: I've met with 26 teams--basically everybody.

Q: A lot of people know about your win in World Juniors, but you also won the year before at Under-18s in Fargo. How much did that championship bring Team USA together and give them confidence heading into the WJC.

BWA: That was huge. It was a really close-knit team. We had a lot of guys who were great players and they wanted to win that tournament more than anything. A lot of those guys realized it might be the last time to wear the USA jersey and we wanted to finish it with a gold medal and that's what we did.

BWA: Team USA has a number of defensemen who will be draft tomorrow. Can you talk about those guys from the perspective of a goalie? What are their strengths?

JC: Well Derek Forbert will probably go the highest, he's a great kid. He works hard and is a big lanky guy. He's really good defensively with some offensive upside. I see him going really high and he deserves it. Then you have John Merrill who more of a steady defensive-defenseman. Nobody seems to ever beat that guy one-on-one from what I've seen in practice and games. Justin Faulk might be the most under-rated. He set the USNDT single season record for goals by a defenseman--and Erik Johnson held that record--so I think he's been over looked a bit and any team that drafts him will be fortunate to get a great player. Jared Tinordi who is a big guy and a great leader, he'll definitely play in the NHL some day. Steven Johns is another great guy--I could go on all day about our defensemen--he was the strongest guy on our team last year. I wouldn't want to face him if I was an opposing player.

BWA: Do you think if your success had developed more slowly you might have taken the route of going through the college ranks [instead of choosing the OHL for next season]?

JC: Yes. That World Championship and winning at Fargo were both really big. They put things in a different perspective. My goal is to play in the NHL and I want to get there as soon as I can. I think that by going to Windsor and playing a lot of games I'll be able to develop more quickly and be ready for the NHL when that team comes calling.