Brett Connolly is a high skill player expected to go in the top 10 of the NHL Draft. He missed much of the season with an injury to first one hip and then the other. Connolly is one of the genuine wild cards because he could be the 3rd most skilled forward but concerns about his health will discourage some teams from taking him early. Here are some of his answers at today's Press Luncheon with the top prospects. 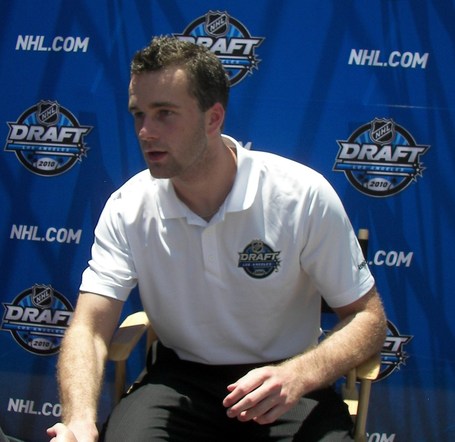 Q: For a junior hockey player, you picked a bad year to be injured.

BC: Yeah. But there's nothing I can do about that. I played a lot of hockey and maybe it finally caught up with me. It's behind me now. I definitely sucked to sit out that many games. Thankfully it's behind me. I had hip problems--it was nothing major. I just had to look after myself and put it behind me.

Q: At the NHL Combine what was the strangest question you got asked?

BC: I was asked if I'd "rather shoot a guy or read a soft poem?" and that one really threw me off. Definitely a different question that I wasn't expecting. I said "shoot a gun" but I don't know if that was the right answer--I was so nervous. [Pittsburgh Penguins question]

Q: Playing for Prince George--a team that struggled in your absence--are there benefits to being a guy that a team needs to be successful?

BC: Yes. That's what made this year so hard. Sitting out and watching the team not do so well--it took a lot out of me. It made me pretty upset some nights, but it is nice feeling to be that guy on your team. I have high hopes for that team next year if I'm back [in the WHL], then we're going to have a good team and hopefully we'll do better than this year past.

BWA: Did you have many teams interview during the season before the Combine?

BC: Interviews--more like little visits when I was on the road. You might meet and go to lunch but that was about it. There were about 4-5 of those little visits.

BWA: Can you talk about the end of your season after you came back. Where you 100% or were you just good enough to get on the ice.

BWA: The Thrashers are one of the teams that is picking at a spot where you might be drafted--did you talk to them?

BC: The only time I talked to the Thrashers was at the Combine. There were no meeting before that.

Q: With all the attention given to Taylor and Tyler, do you feel like whoever is picked after them is the winner of the competition for the next group of players?

BC: A little bit. Obviously Taylor and Tyler deserved [the attention] they got this year and had exceptional junior careers. But for us, flying under the radar is good too. We're still going to be someone's first round pick.

Q: How are your hips?

BC: Good. Completely 100%. I continue to get checked on and I'm training hard. I haven't felt it since March. So I'm confident that they are as good as new and it's behind me.

BWA: Did you do any workouts for teams after the Combine?

BC: Yes. Minnesota had me in there doing some stuff. Phoenix and a few other teams. I was pretty busy with doctor's appointments...I was pretty busy yesterday and today...there were a few teams.

Q: How was your meeting with Minnesota go?

BC: I had a really good meeting with Minnesota. Obviously their doctors wanted to check me out. They had me do some movement stuff with my legs. Overall it was a good meeting. [two or three weeks ago]

Q: What did you and your agent do about the injury?

BC: We had two or three doctor reports that we sent around to teams. I'm pretty confident that we did all that we could to clear this up.

Q: What have you done in terms of sight seeing so far?

BC: Batting practice [at Dodgers Stadium] was pretty fun. Hall told everyone that whoever hit a home run, everyone else would have to chip in $50 bucks. I hit one and he said "well we didn't shake on it"--kinda screwed me there [laughs] it was fun. I hit it 330 feet, hooked it down the line.

BWA: Do you come from an athletic family? Did your parents or siblings play anything?

BC: My dad's from a family of nine and they all played every sport possible in high school. I think I get a lot of my athleticism from them. My mom was a volleyball player.

Q: What teams have you talked to recently?

BC: Anaheim, Phoenix, Minnesota, Tampa...Carolina was going to meet with me yesterday, and I have St. Louis and Anaheim today. Carolina is out in Hollywood and it is tough to get to, so they passed and said they had everything they needed.

BWA: Can you talk about how not playing most of the season affected your mental approach to dealing with adversity?

BC: It is something that will help me out in the long run. If it happens again, I'll know how to handle it for sure...I'll know to be patient and really look after my body.

BWA: Do you feel like your prior season [age 16] is really your resume for this draft?

BC: I did have a good 16 year old year and I was really looking forward to improving on that this year. I was on pace to do that, but I had the injuries and there is nothing I can do about that but move on and put it behind me and be ready for training camp.