Revisiting the Myth of the Late-Round Defenseman

Share All sharing options for: Revisiting the Myth of the Late-Round Defenseman

About a week and a half ago, I wrote a post claiming that the concept of the "late-round gem" defenseman was bunk. When I first started writing that blog, my actual goal was to show that I could quantify the ease of finding late-rounders on the blueline (as relative to forwards in those rounds.) What I ended up doing was quite the opposite. Here's a bit of my conclusion from that story:

If you're judging NHL games as being important and not the quality of the player in those games, it's not easier to draft defensemen in later rounds (as compared to the first round). There's no apparent "late-round defensive gem" effect. Late-round forward gems cancel it out.

Of course, at the time, I wasn't entirely satisfied with this answer, so I detailed a different methodology I wanted to try. I've run some of the numbers and will present them below.

In the first post, I was comparing first-rounders to after-first-rounders. This time around, I took quartiles (first 25% drafted each year, next 25%, next 25%, bottom 25%) so I could generate a graph similar to the one I drew in Paint for the last post.

In addition, I wanted to average across a smaller number of years. I thought 4 years would be reasonable. My intent was to create three different charts for three different four-year periods, but after I finished the first one, I decided it would probably be convincing enough. The period chosen is 1982-1985.

Lastly, rather than look at the average number of games per pick, I decided to use the simpler "percentage of picks who play 200 NHL games." Since none of the players drafted during the period I used are still prospects or young players, this works just fine. 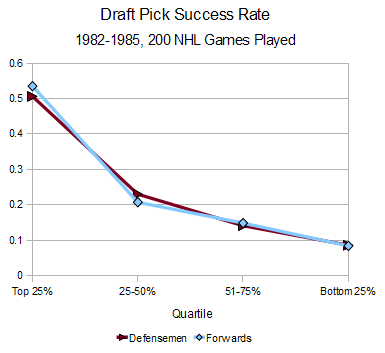 Astute readers would note the two lines look virtually identical. I would agree. While forwards do drop off a bit quicker than defensemen (as I had initially predicted, though well within a reasonable margin of error), they don't perform better in the bottom quartiles. Teams are just as likely to get a late-round forward gem as a late-round defensive gem.

This confirms the drafting theory we all know best: don't get cute, just take the best player available.