[Update: The deal is showing on CapGeek, so we'll assume this one is in the bag. -timmyf]

[Update: According to Chris Vivlamore of the AJC, the Thrashers haven't actually signed Fredrik Pettersson yet. We'll update the story as we get more information. Rick Dudley, you're welcome to call me when the deal does get signed. ;-) -timmyf]

The Atlanta Thrashers have signed a 23 year old Left Wing from Frolunda of the Swedish Elite League. Pettersson scored 20 goals last season which led his team. He finished with 2 more goals than former Thrasher Tommi Kallio, but Kallio had more assists and edged Petterson out for the team points lead. Newly signed Thrasher Carl Klingberg also played for Frolunda. He choose to sign with Atlanta over the Minnesota Wild and two other NHL clubs. 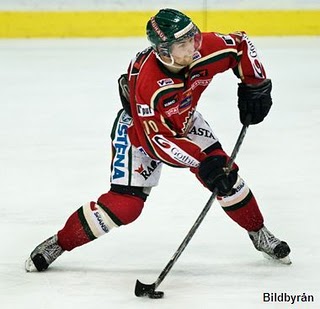 Every summer there are a small number of over-age European free agents who are signed by NHL clubs. Often they are late bloomers who went un-drafted because they did not impress when they were 18 or 19 but became solid players as they matured. In this case, Petterson was in fact drafted at age 18 by the Edmonton Oilers in the 5th round of the 2005 draft. Petterson actually came over to North America after he was drafted and played two seasons for the Calgary Hitman of the WHL where he averaged a point-per-game at age 19 and 20. Those numbers suggest he has NHL-level puck skills, but he is not a top six type of forward. When his junior stint was finished Pettersson turned down an AHL-only contract and returned to Sweden where he has improved on his point total each of the last three seasons.

Red Line Report listed Petterson as one of 10 European Free Agents to watch. Here is there description of his game:

Former Edmonton pick is a smallish, pinball-like winger who skates hard directly into the most heavily trafficked areas on the ice. Great forechecker who puts heavy pressure on defenders with relentless puck pursuit. Despite small stature he loves to finish off checks and is a highly physical energy player. Irritates opponents with n-your-face presence, getting under the skin like a splinter. Likes to shoot from any angle and has a very heavy shot, but not much touch. Goes directly to the net to pick up his share of dirty goals.

Sounds like Klingberg might have a fellow Swede to run roughshod through the NHL this coming year. Or how about a "bash brothers" line of Klingberg-Cormier-Pettersson? Could be fun to watch.