The Myth of the Late-Round Defenseman

Share All sharing options for: The Myth of the Late-Round Defenseman

I recently presented some data showing that elite NHL players overwhelmingly come from the first round of the draft, and furthermore, they typically play for the team which drafted them. My goal was to underscore the importance of drafting future stars in the first round.

But what sort of strategy should we adopt for later rounds?

We say it all the time here at BWA: it's easier to find NHL-caliber defensemen in the later rounds of the draft than it would be to find equivalent forwards. Forwards blossom earlier, says conventional wisdom, so they're easy to pick out at the young age they enter the draft. Lots of good defensemen just need a bit of extra time to develop: a defenseman's game mature into his mid-20s. How often has a team given up on a defensive prospect a year or two before that player finally breaks through? (See: Coburn, Braydon)

Personally, I'm a believer in this mantra. This is a large part of why I believe the Thrashers should select two forwards with their first-round picks in this draft. (With an exception for a defenseman or goalie who falls to us when they should have been picked much earlier.) It only makes sense: since forwards get much trickier to pick the longer you wait, but defensemen don't face as much of a drop-off, pick forwards early and defensemen later.

In as crude of a manner as possible (with an MSPaint drawing), I present The Basic Idea: 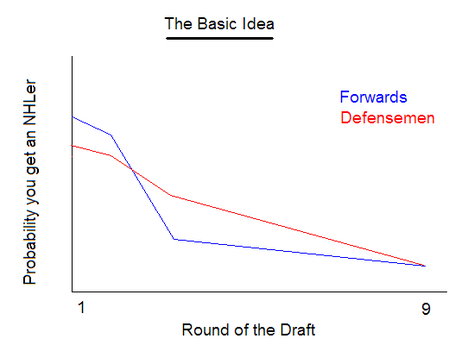 The basic idea is that, in the first round of the draft, you've got a solid shot at picking an NHL-caliber forward or defenseman. That drops a bit in the second round and pretty quickly after that. At some point - the 4th round or so - it drops off less quickly. The argument is that defensemen are a little easier to grab in those later rounds, meaning forwards fall off quicker.

After the jump, we'll start to analyze this claim. We'll need a methodology for testing it and a whole lot of source data.

This is a difficult nut to crack. To the best of my knowledge, there aren't any great tools for reporting on hockey data. (I've made it a long-term quest of mine to solve this problem, but that's another story entirely. Oh, and by "great tool," I mean a true analytical reporting engine, not just a chart that can be filtered.) To make this a little easier, I'm going to look at a slightly simpler problem. In my last blog, I claimed that there is a distinct difference between the first round and later rounds. I showed that the chance of getting an elite (in this case, 70+ points this season) player in the first round was three times as likely as in all other rounds combined. Well, let's continue to work with that split: first round versus all other rounds.

The goal will not be to show that forwards are easier to pick in the first round than defensemen. Read that again.

Here's what I want to look at: Average NHL Games played per Selection. I get one selection per round, and for that selection, how many games can I expect that player to play in the NHL on average. We already know this goes down in later rounds of the draft, so I'm more concerned about the ratio between forwards and defensemen. (I'm going to toss in goalies just for fun.) The goal is to show that the ratio swings in favor of defensemen in the later rounds.

Looking at Some Data

I took data from the NHL Entry Drafts in 1990 through 1999. (It's okay that a lot of these players are still playing. We're dividing out anything that would cause trouble.) I found the average NHL Games played per Selection for rounds 2 and later and made a graph. Note that this graph doesn't show the actual data, just the relation between forwards, defensemen, and goalies. Here goes... 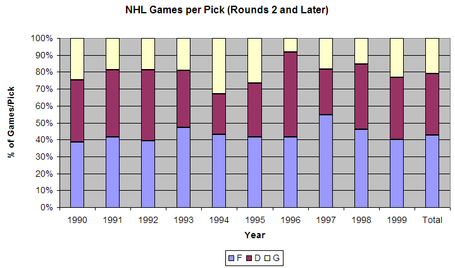 I've provided the results here for each year I looked at so you can get an idea of how much year-to-year variance was contained in the data. The total column at the end shows the average across all years. Note that about 43% of the total came from forwards and 36% of the total came from defensemen. (So yes, while we weren't looking for this factoid, it is easier to pick forwards than defensemen. At least... you are more likely to get more NHL games out of them.)

This is the data for the late rounds. If we look at the first round, we'd expect to see a ratio that favors forwards even more, right? So we're looking for more than 43% for forwards, less than 36% for defensemen.

Well, that's not the result I got. Here it is: 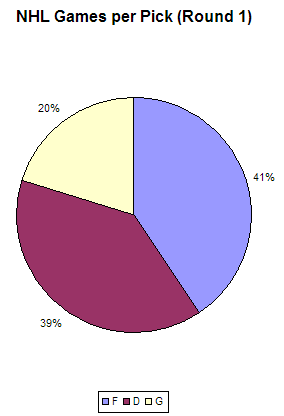 Forwards at 41%. Defensemen at 39%. That's about two percent the wrong way for each... that's within a reasonable enough margin to call it equal.

What does this mean? Well, if you're judging NHL games as being important and not the quality of the player in those games, it's not easier to draft defensemen in later rounds (as compared to the first round). There's no apparent "late-round defensive gem" effect. Late-round forward gems cancel it out.

Problems with this Analysis

Problems: there are some. As I mentioned, quality is nowhere in this analysis. If the bulk of those forwards in late rounds are dime-a-dozen grinders and the defensemen include more high-end players, our original hypothesis could still hold true. (Rigorously analyzing this requires more time than I can commit to a hobby. Sorry, guys, I have a job during the day.)

Also, who's to say that the first/other round split isn't covering up the effect? Perhaps a first+second+third/fourth-and-lower split would confirm the original hypothesis. (I do believe you need to bucket the rounds to a certain extent. Perhaps a better analysis would look at quartiles. I could probably rerun the numbers with quartiles...)

There's also a case to be made that looking at a 10-year period is too long. A lot changes with the game in ten years, so perhaps I should have limited my window to a shorter (say, three or four year) period.

These problems are all related: the difficulty is deciding how to bucket data. If you look at each round from each draft class as a unique sample and don't do any averaging, you get a very high variability in data. Each data bucket doesn't contain enough data points to be consistent. There needs to be some bucketing, some grouping of data, so that each data point contains enough highly-variable samples to be both accurate and consistent. If I chose a poor way to bucket, I could be looking at bad data. (For reference, the 1st round data includes 150 forwards and 82 defensemen. That should be sufficient. The quantity of forwards and defensemen in each year's 2nd-Nth round was very similar, usually 130-140 forwards and 70-80 defensemen.)

If I have some additional time, I'd like to re-evaluate the data using four-year periods, probably 1980-1983, 1984-1988, and 1989-1992. For each of those four-year periods, I'll look at the NHL Games per Pick for quartiles (dividing the total into four groups, ie first 25% picked, second 25% picked, etc) split between forwards and defensemen. If I get the same results, I'll feel pretty good about this analysis. If I get something different... Well, let's hope I don't get something different.

How this changes my 2010 Thrashers Draft Strategy

Well, for the most part, it doesn't. I still think we need to target forwards in the first round, though I have a little less statistical ammunition for that argument than I thought. I think we've got enough young defensemen (in Bogosian, Enstrom, Valabik, Kulda, Postma, and Vishnevskiy) to hold us over for a few years.

There are a lot of question marks among our prospects at forward: if guys like Patrice Cormier and Angelo Esposito can make it here, we'll be in good shape, but both have big asterisks by their names. Jeremy Morin looks like he'll be a big scorer. Carl Klingberg should provide secondary scoring. Bryan Little had a down season (as we all should have expected) and may just be a 2nd-line forward. Niclas Bergfors had a great rookie year, but he's not an 18-year old: he was supposed to have a solid year as a 22-year old. Evander Kane looks every bit like the top-line player we expected.

The problem? I don't see a future top-6 in that group yet. I see maybe 4 of the guys we need. I'd like to add two more top-6 forwards in this draft and, go figure, we've got two first round picks. Let's do it.