Will Colby Return Next Season?

Share All sharing options for: Will Colby Return Next Season? 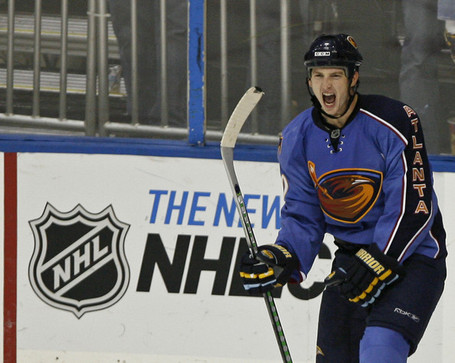 Straight from the horse's mouth, Colby Armstrong would like to remain a Thrasher.
As free agency approaches, the team is up for a possible whole new look next season as they have 11 UFAs on the books. I got the privilege of speaking to one of them far far away from the rink, and he was very genuine in his wanting to stay in Atlanta and help the team reach the playoffs next season. He's adopted Atlanta as his second home, and was happy to be married here and is about to welcome his first child. This may sound cliché, but he really likes the direction of the team, stating the core is good and spoke highly of Rick Dudley being promoted to GM. He said he has not yet been approached by Thrashers management (nor has any other UFA), but believes that is because they are looking for a new coaching staff first. As we all anxiously await July 1, it appears the players have real high hopes for next season.