Thrashers co-owner Bruce Levenson made reference to salary efficiency in his interview with the AJC last week. While he ducked the question of how much they will spend on payroll he did suggest that "wins per dollar" is their yardstick for success.

Q. You have 10 unrestricted free agents, how do you see the payroll changing? You are in the bottom third in the NHL in payroll. Do you expect it to stay there? Is there a budget in place?

A. We were running right near $50 million. I hope we can achieve with the Thrashers what we’ve been able to achieve with the Hawks — to build a winning team in a financially responsible manner. That’s what we’ve done with the Hawks. There are ways to measure that like payroll dollars per win. We are at the very top of the NBA and there are a lot of jealous owners with what we’ve been able to accomplish there. I hope we will be able accomplish that. We don’t have an unlimited budget here unfortunately to spend on players. That would make it much easier so we are going to try to do that in a responsible way.

Technically, dollars per win is not the most accurate measure because it is biased toward low spending teams. Even a roster filled with cheap AHL players wouldn't finish with zero points, so the best measure asks "how many points were gained over the a roster filled with players making the NHL minimum"? (Yes, I know that the cap floor prevents such a roster, but it is a theoretical minimum.)

Unfortunately the Thrasher have fared rather poorly in the NHL Salary Efficiency rankings since the cap was instituted. Using the cap hits for every team (calculated according to which players are on the roster on a daily basis) from www.NHLSCAP.com and now www.capgeek.com I created the table below (pre-lockout numbers are less accurate and come from opening night roster in www.USAtoday.com salary database). 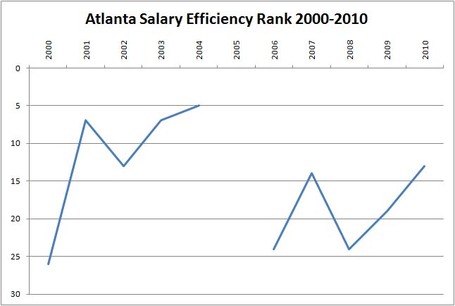 To be perfectly blunt, the Thrashers bottom ranking in salary efficiency is the strongest argument for replacing Don Waddell as GM. If your franchise that is spending less than the average team, your organization MUST be better than average in terms of the bang you get for each additional dollar you spend on payroll. If your management team is merely average in their ability to get value and you spend less than most other teams you're doomed to failure in the long run. The Thrashers only finished above average twice. In 2007 they mortgaged the future in deadline trades so the true cost of that finish was rather expensive. The good news is that in 2010 they finished a bit above the middle of the pack, their best number in the cap era.

Who were the main drivers of the Thrashers jump up in Salary Efficiency? Bargain scoring from (Rich Peverley, and Maxim Afinogenov) young (cheap) players and a career year by Johan Hedberg. As I wrote last summer, the key to contending on a budget is lots of young (cheaper) talent. It provides the most bang for the buck (adopting a more defensive style would also help too). Typically, free agents rarely provide a great return, you just hope to break even on them. Hedberg and Afinogenov were two very rare exceptions, free agents who provided superior value relative to their cost. Ron Hainsey basically broke even in terms of value, while Kozlov and White provided a poor return on investment.

Below is a table in which each player is ranked according to their "bang for the buck" ratio. I am using their cap cost (excluding bonuses) and their value (Tom Awad's Goals Versus Threshold) and their age. Notice how age is related to this ranking. Nearly every player in the top 1/3 is age 30 or under (Hedberg chief exception) and every player over 31 ranks in the bottom half (except Hedberg again). NHL players usually hit their peak between age 25-30 and decline after that period. Goalies see more variation than any other position and they violate the career curve pattern more often than skaters do. Goalies are also much less predictable from one season to the next, making big investments in goal a very risky bet.

In the table above all of the Thrashers free agents are highlight in bold.

Let me take a stab at some off season moves I'd like to see. I think it is a no-brainer that Artyukhin should replace Boulton and Arturs Kulda should replace Popovic. I assume Kozlov and Armstrong are gone (replacement for Armstrong: Macheck or Cormier), while Schubert and Slater could be re-signed (also would like to see them make a bid for Malhotra).

Kubina was a solid addition, but if he doesn't want to return I'd like to see the Thrashers use his salary to make a bid on Zbynek Michalek (age 27 PHX), or Anton Volchenkov (age 28 OTT).

Afinogenov will demand more salary if he wants to return to Atlanta, if not the Thrashers might target free agent Alexei Ponikarovsky (age 30 PIT) or consider a salary induced trade for Patrick Sharp (age 28 CHI) or Ales Hemsky (age 26 EDM).

The biggest puzzle is Hedberg. The man had the best year of his career, but will turn 38 next season. The odds of him suffering a decline are about 95%. Do you re-sign him expecting a decline and hope that Pavelec takes another step forward to off set that decline? Or do you offer him a goalie coach job and pursue one of the UFA goalies? Tough call.