The Atlanta Thrashes lost 2-1 in Columbus last night and effectively eliminated themselves from playoff contention. In the seven games following the trade of Ilya Kovalchuk the team won 10 of a possible 14 points to push their playoff odds to 60%. That hot stretch was followed up by an ice cold 4 consecutive losses in which the offense completely dried up.

When the the Thrashers were winning the other playoff teams were struggling which helped Atlanta climb up into the 8th position in the standing. But now the tide has reversed and the other playoff contenders are winning as Atlanta has lost--which has accelerated the team's decline. 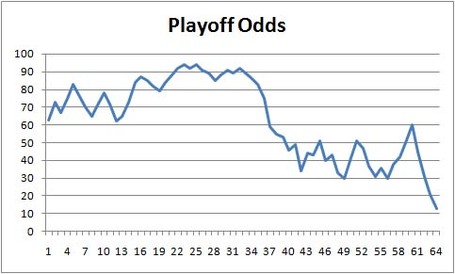 As the graph above illustrates, the real turning point in the season came not in the last four games, but back in late  December / early January when the team went 11 games with just one win and three OT/SO losses. During that 11 game free fall the Thrashers winning percentage was an expansion quality 23%. Even good teams have bad streaks during the long season. But the Thrashers inability to staunch the bleeding during December was catastrophic to for their playoff hopes. 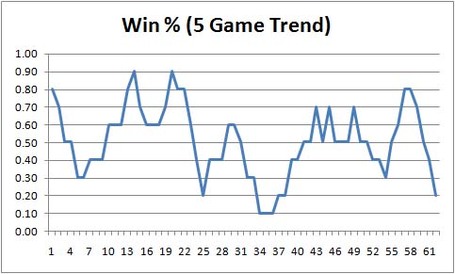 The moves and non-moves made at the Trade Deadline contributed almost nothing. Veterans Maxim Afinogenov, Slava Kozlov and Colby Armstrong were all retained. Afinogenov had two costly turnovers that contributed directly to the Carolina loss and Armstrong took a penalty that proved very costly in the Nashville. Deadline acquisitions MacArthur and Artuykhin both scored in the win over the Islanders and then promptly became invisible men. Chris Chelios was signed and has played just one game but he was on the ice for both goals against and redirected the first goal into the net.

With the benefit of more data it appears that the Thrashers were simply hot after the Kovalchuk trade and now they're cold. The team is not as bad as their 4 game losing streak would indicate, nor are they as good as their hot streak after the Kovalchuk trade. Baring a miracle 6 consecutive win streak, the season is toast and it will soon be time to think about draft position (7th overall as of this morning) and free agency and re-signing RFAs (Bergfors, Pavelec).

This is only the 3rd time in 10 years that the Thrashers have had a realistic shot at the playoffs in March (qualified just once). Their run should have lasted longer in my opinion, but the team work ethic was very inconsistent for most of the season. Far too often the team only played hard for half a game or just one period. They threw away points that were there for the taking. They should have been in this playoff race until the final days of the season in my opinion. They had the talent to compete, but lacked the will. I hope that bothers them as much as it bothers me.