Does Tobias Enstrom Not Shoot Enough?

Share All sharing options for: Does Tobias Enstrom Not Shoot Enough?

"Shoot!" yells the woman behind me.

"That Toby Enstrom, somebody needs to teach him to shoot the damn puck," offers her companion.

"If Toby shot more, the powerplay would be less predictable and more likely to score!" says the conventional wisdom. "But everybody knows that Toby will just pass. It's so obvious!"

It's hard to be the person who pops in to suggest that maybe, just maybe, the guy who's taken himself from an 8th round (239th overall) draft pick to the cornerstone of the Atlanta Thrashers blueline just might know what he's doing. Of course, there's no hard and fast rule for when to shoot the puck and when to maintain possession, but most hockey fans live and die by the Gretzky rule:

True. But also terribly misleading. I'll try to solve this riddle with stats... after the jump.

If you take a look at the basic powerplay stats, you'll notice a few things. Enstrom is the most effective at picking up points by far: his 3.24 points/60 compares quite favorably to Hainsey, Kubina, and Bogosian (2.37, 2.31, 2.02 respectively.) He's second in goals forced/60, a measure of how effective the entire unit is. (Kubina: 5.55, Enstrom: 5.26, Bogosian: 4.04, Hainsey: 2.37.)
If you take the first measure and divide it by the second, you get points/goal forced, a measure that shows what percentage of the time the player gets a point when the powerplay unit gets a goal. You could perhaps call this the "participation rate." Enstrom sits at 62%, compared to Kubina at 42%. (Hainsey and Bogosian may not have played enough on the PP for this to be a useful stat.)
Perhaps more interesting is the graph you get when you compare the powerplay unit's shots (per 60) with their goals (again, per 60). The operating assumption is that more shots means more goals, right? About that... 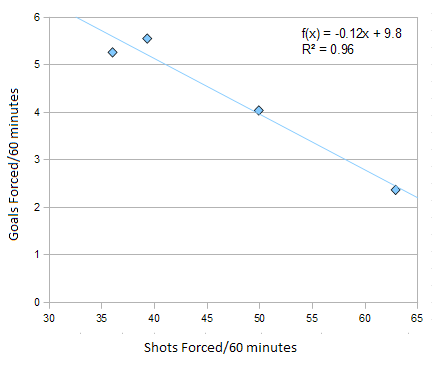 As it turns out, more shots seems to mean less goals. The powerplay unit's shooting percentage absolutely plummets when Zach Bogosian or Ron Hainsey are on the ice. It's quite high when Kubina or Enstrom are out there. That split is not particularly surprising. Isn't that the stereotype? Europeans shoot less and hold the puck more? They're more crafty? (Except a Mister Alexander Ovechkin, of course.)

Remember this next time Toby passes rather than attempt a shot on an unscreened goalie with a few bodies in the way to block the shot: you may not like it, but he's effective. More effective than Human Puck Cannon Ron Hainsey. (Yes, the point on the graph to the far right is Hainsey.) You don't score on 100% of the shots you don't take, but you also don't score when you fire the puck at a penalty-killer's shin.