In Case You Were Feeling Better About the Thrashers

Share All sharing options for: In Case You Were Feeling Better About the Thrashers

Thrashers fans should be feeling a little more optimistic in January. The team is playing much better than they did in December, but I'm still concerned it's not enough. Just a quick reminder: the most important predictor of a team's final position in the standings is goal differential. 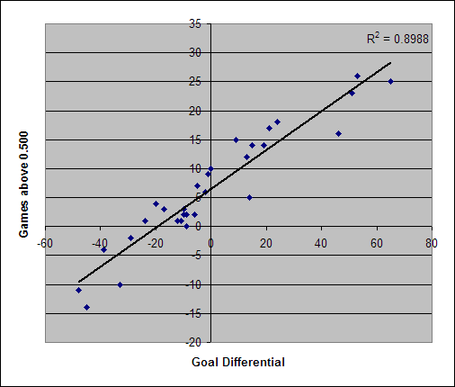 The Thrashers are -9 on the year... which isn't too terrible. This season, in fact, that might get them into the playoffs (thanks to the West's absolute dominance over the East). The only problem? They are -7 in January. If they keep playing like they have in January, they'll fall further and further down that curve.

Right now, it's hard to look at the standings. With the tight bunch between spots 7 and 13, the standings will get mixed up day-by-day. Here at BWA, we'll try to tie you into some longer-term trends.