The Decline and Fall of Todd White and Slava Kozlov

Share All sharing options for: The Decline and Fall of Todd White and Slava Kozlov

The recent discussion about John Anderson as Head Coach has focused on the topic of Kozlov and White. Both veterans enjoyed career bests (or close to them) last season under Coach Anderson. This season both are in huge scoring droughts. Personally, I prefer to evaluate a coach using team summary statistics as I did in my previous post, but let's take a closer look at these two veterans.

Last year the "Little-White-Russian" Line was red hot--too hot in fact. At even strength 9% of all NHL shots go into the back of the net and become goals. At the team level there is a powerful tendency to regress back towards this mean. What did that previous sentence mean? On average a hot shooting team will tend to slid back to the NHL average--nobody stays "hot" forever at Even Strength. (For a more extended discussion of this topic read Vic Ferrari's post.)

Last year the 2nd Little-White-Kozlov line simply carried the Thrashers offense while the Kovalchuk-Williams-Christensen line failed to get anything going. The 2nd line was hot both on the Power Play and at Even Strength. If you look at the table below you can see just how "hot" Kozlov and Little where. I went back and calculated the Even Strength Shot Percentage for Little, White and Kozlov for each quarter season increment over the last 2.75 seasons (20 game segments). As you can see below, in the 1st quarter of last season Kozlov (blue line) had an insane ES ST% of 27% which is way out of line with his recent career. Likewise, Bryan Little also had a 23% ES ST% in the 1st quarter of last season. Both players came back to down to earth in the following quarters. 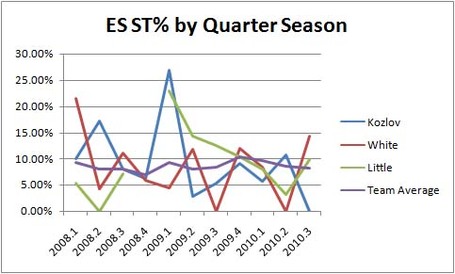 Since that red hot 1st quarter of last season Kozlov has had an ES ST% that is below the Thrashers team average most of the time. Bryan Little watched his ES ST% go into a straight line decline until hitting rock bottom in the 2nd quarter of the current season and he has just recently rebounded with a better-than-average 3rd quarter. So the big question is this--was Anderson responsible for the spike and collapse of Slava Kozlov or is it a case of player being red hot and then coming back down to earth? I tend to fall into the latter camp.

Another factor to consider is the role of aging. Father Time waits for no man and both White and Kozlov are on the bad side of age 33. To get a sense of each player's scoring patterns I created the chart below. It shows the scoring rate of White and Kozlov both at Even Strength and on the Power Play. The numbers are expressed as Points per hour of ice time.

Generally speaking Even Strength scoring rates tend to be more stable from one season to the next, while power play scoring rates bounce around a lot more. Part of this difference is sample size. Power Plays run hot and cold and because each player gets many fewer minutes on the PP then they do at ES the scoring rate on the PP varies much more.

If we look at the ES Scoring Rate for Kozlov and White both guys are remarkably similar. They both averaged around 2 points per hour of ice time prior to the lockout, and both saw a modest bump up right after the lockout and entered a decline phase that has accelerated during the current season. That hot 1st half of last season was likely a mirage in an otherwise downward trend line. 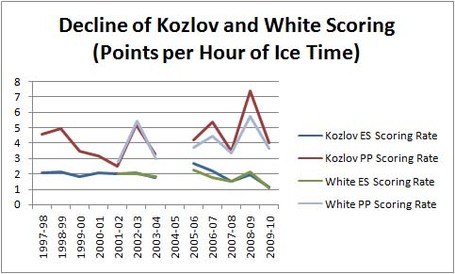 When I look at the data, it suggests to me that Slava Kozlov and Todd White are players who are in the decline phase of their career. They both enjoyed a brief Indian Summer in the 1st half of last season, but that bump in scoring was not sustainable. They were not generating more scoring chances than in the past--instead they were just finishing at a higher rate--and that rate was not sustainable. Both players have exited this "hot" period and now stand exposed as older declining NHL veterans. Does Anderson deserve credit for that "hot" stretch last season or was that simply good fortune? Opinions will vary.