In Defense of John Anderson: Follow-up

Share All sharing options for: In Defense of John Anderson: Follow-up

A quick update on my post a couple days ago about John Anderson. I had promised a response to this on Twitter. So here goes... (and sorry to Falconer for stepping on his post. Make sure you scroll down and check out his take on Anderson!)

Thrashers Web Guy Ben Wright responded to me and raised a really good question (which I probably should have foreseen):

Your analysis begs the question- why were White and Kozlov so successful last season under Anderson but not this season?

Okay, let's tackle that one. After the jump.

First, let's look at how these guys (and I'll toss in Little as well) got goals between the two seasons: 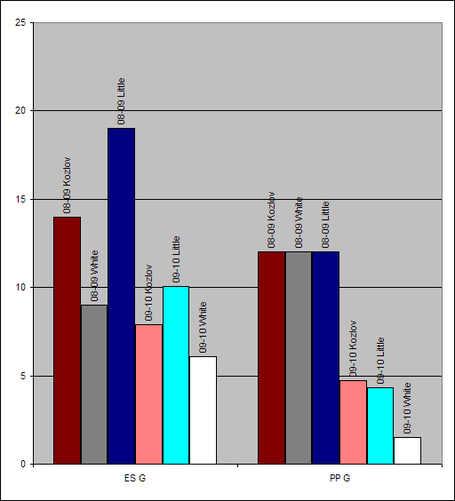 Note that the goals for all three guys for this year are 82-game projections (even though none of them will hit 82 games). This makes it much easier to compare season to season. At even-strength, it's really only Bryan Little that has seen a big drop in production. His 19 ES goals in 2008-2009 were pretty solid, but he's on track for just 10 this season. That's a big 9 goal drop. Kozlov, on the other hand, is seeing just a 6 goal drop and White just 3.

On the other hand, all three of these guys picked up 12 goals on the power play last year. This season, the guys project out to 5 (Kozlov) 4 (Little) and 2 (White). That's a huge drop in production. If we were to graph the year-over-year changes (again, using our 82-game projection), we get this: 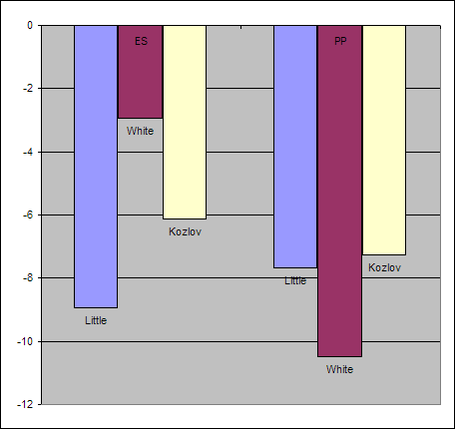 Now, if we were to take this same graph, but rather than just show an absolute number of goals, we looked at the scoring rate per 60 minutes in each situation, we get a slightly different picture. 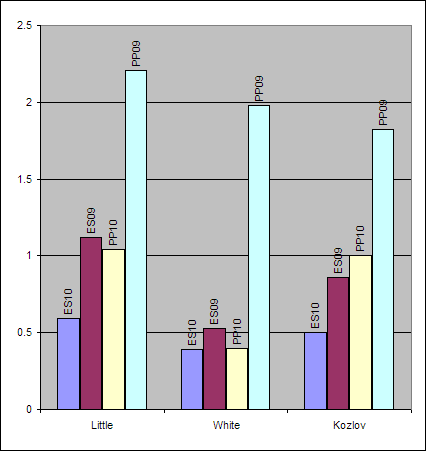 Each of these guys should have two bars that pop way up. The PP scoring rates should be significantly higher than the even-strength rates. That's just not the case. Little scored more last year at even-strength per 60 minutes than he's scored this year on the power play. Same thing for Todd White. Slava Kozlov at least fits the proper mode, but we see the same thing: a huge drop in effectiveness on the power play.

The important question becomes: is this something related to John Anderson or something related to these players? This is a hard question to answer. First of all, let's be clear: these guys are have never been strong players at even-strength: all three were minus players at 5-on-5 last year and all three are minus players at 5-on-5 this year. (Little being the best of the three and Kozlov being the worst per unit ice time.) This is where we get back to my argument: White and Kozlov simply don't seem to be a good fit for this system. Bryan Little has performed better while spending a lot of time on the ice with these guys... and he gets a pass for being young. (Byron Young.) I'd like to see what his stats look like after several weeks away from either of these guys.

My sense of it is (and this isn't something I can prove with stats) that Bryan Little will rebound over the next couple seasons. I'm not sure if he'll be a regular 30-goal scorer, but I think he'll hit 20-25 with some regularity. Slava Kozlov has approached the end of a long and successful career, but he just doesn't fit our mold. Todd White had a few great years with the Ottawa Senators, but his 73 points last season were an anomaly. He played on a very, very successful power play unit and racked up the assists. That's not a knock against him as a player - he earned those assists - but having expectations higher than 50-60 points is just setting Todd up to fail. What concerns me with White is that, after going +48 in 230 games with the Senators and +7 in 138 games with the Minnesota Wild, he's been -38 in 210 games with the Thrashers. It's hard to compare these numbers directly against each other, as the three are all different teams, but I see a steady downward drop with a peak in his 2002-2003 25-goal season.

There you have it: why did these guys see such a performance drop? Well, they scored a whole ton of power play goals last season, and that led each of them to seem much stronger. At even-strength, these three guys haven't been particularly strong, and as the power play tallies have fallen, so has their stock with Thrashers fans.