In Defense of John Anderson

Share All sharing options for: In Defense of John Anderson

There has been some disappointment among Thrashers fans with head coach John Anderson. Some blame Anderson for being unable to motivate his players. Others say that his system will not work at the NHL level. I have a different belief: I think that John Anderson has been working with players who are not optimal to play in his system. Both sides to this argument have plenty of circumstantial and subjective data, but I thought it was time to finally make this point using a few statistics.

Players acquired after the hiring of head coach John Anderson - acquired to play his system - have played better than players acquired before he was hired. (I'll use data from this season.)

This is just one way to make my case. There are others. Perhaps, over the next few weeks, you'll see some other versions of this same argument. In fact, I'd like nothing more than to see the other writers here at BWA chime in with their own case for Anderson... for or against.

Let's get started... after the jump.

First, here's how I've broken down the list of players acquired before and after the hiring of Anderson:

Bogosian was scouted at a point when Anderson was the likely coach, but he hadn't officially been hired. Bogosian would have been our pick whether Anderson was coach or not, (we obviously figured out our 3rd Overall Pick well ahead of the draft,) so I have no issues sticking him in the before. Similar story with Popovic: he was signed after Anderson came in, but he was previously a Thrasher before the signing, so I'll consider him "before."

My goal is to show that the After players have performed better than the Before players. Presented below are a table of totals for each:

The games played are off by a bit. We can see the goals are pretty even between the two groups, though the After players have more assists. This will be far more noticeable when we look at the per-game numbers. There is also a big difference in plus-minus: the After players are +47 better than the Before players. That is a big number, especially considering plus-minus is a very sound predictor of how your team will finish. On a per-game basis, here's the important numbers in handy graph form: 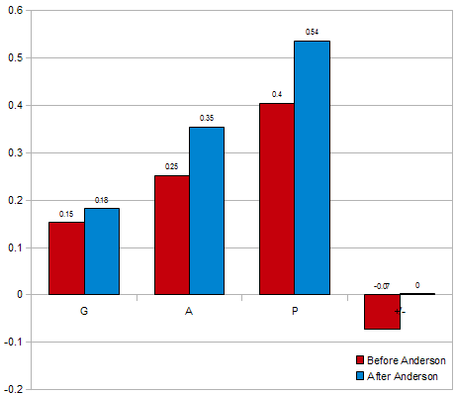 And just in case you think that the new guys are making more money, here's the total cap hit for each group:

The "Anderson system" guys are beating the guys who came before at all the major even-strength metrics (on a per-game basis) and doing it for a similar cost. The After group also contains a lot of highly-paid defensemen (Oduya, Hainsey, Kubina) that don't score a whole lot of goals. It's quite apparent how cheap goals are with the After group (Antropov, Afinogenov, Peverley, Kane...) That's really saying something, especially considering that some of the guys in the Before Anderson group really are Anderson-style players. (Toby Enstrom is perhaps the most notable example.) If you arranged these guys within "fit the system" and "don't fit the system" groups, the effects would be more pronounced.

Hopefully those statistics are enough to start to make the case that Anderson's system requires a specific type of player. I'm going to give you a more specific example, and this is one that might seem like we've seen it over and over again this season.

I see the problem as a clash between Anderson's system and the wingers we had. Let's use a quick diagram to illustrate this.

The play starts with Kubina on the right point with the puck. He can move it across the line to Toby or down the wall to Little. Now, Little doesn't have any room to send it further down... so it makes sense to move it to Toby. That's move #1. We see this D-to-D pass a lot in Anderson's system... and in hockey in general. The opposing team usually spends a lot more time cutting off lanes down low. This leaves room for the defensemen up at the point.

Toby has the puck, and while he'd prefer to just pass to Kovy, he sees he has room to move toward the net. This is the key difference between Anderson's system and many others: while a lot of defensemen would just shoot the puck from here and hope for a rebound, Enstrom is supposed to walk the puck in as far as he can. The two defenders are going to move to cover the open ice and collapse on Toby. He's got a good chance to get a shot off, though.

You see the problem here? The other team's right wing is pretty high in the zone. When Toby jumps towards the net, there's nobody behind him. In this circumstance, as soon as Toby starts to move toward the net, Kovalchuk needs to fall back to the point. If there's a rebound and the opposing team comes up with the puck, he's playing defense now. He needs to break up the pass to the right-wing at the blue line.

The problem is that Kovalchuk wouldn't always do this. And, well, that's to be expected: he's on the ice to score. He's ready to get in position to score, which probably means heading toward the net for a rebound. If the Thrashers come up with it, then great... we get some sustained offensive pressure. If not, there's a good chance that right-wing makes a beeline toward Hedberg or Pavelec at the other end.

Anderson's system requires wingers to know when to fall back and play defense if they are in the offensive zone. Kovalchuk's defense in our own end was atrocious, we're all aware of that, but it was his play in our offensive zone that hurt as well. Ditto Slava Kozlov: Kozlov just doesn't have the gas in the tank to jump back and keep up with these guys. There is far too high of a mobility requirement for wingers in this system.

That's not to say that centers never need to cover the point, but since they are often playing deeper in the zone, it's usually the winger that's on the hook for playing defense in the offensive zone.

That's the core of my thesis: Anderson's system requires defensively responsible and highly mobile wingers. That's why I've been pushing for consistent plus-wingers (like Alexei Ponikarovsky) to fill the void left by Kovalchuk (and perhaps, after this season, Kozlov.) As guys like Bryan Little, Niclas Bergfors, and Evander Kane mature both physically and mentally, we'll see these types of mistakes shrink and give up far less goals due to odd-man rushes (and clear breakaways.)

Hopefully this casts some light on the question, "if this is our best defensive corps in franchise history, why do we still give up so many shots/goals?" The defensemen are doing what they should be doing: taking open ice. It's the wingers who aren't living up to their half of the plan. To a certain extent, John Anderson is responsible for getting players to play his system, but we've seen what happens to Thrashers coaches when they bench Kovalchuk. It's not pretty.

We've seen a lot of "addition by subtraction" with this Thrashers squad. I would bet that we'll see even more of that after this next off-season.

That said, I'm curious as to what you guys think of Anderson. I've been a little shocked at some of the comments here at BWA and around the interwebs. Vote in the poll and leave a comment.

This poll is closed