Share All sharing options for: Best Things of The Week, Dec 13-19

Morning, everyone. This is the first of a hopefully recurring series that will boil down what I think are the five best things of the previous week, both Thrashers and non-Thrashers-related. Hope you like it.

When I posted a link to the video of HBO's excellent "24/7 - Penguins-Capitals", commenter dennylambert!! said, "I’m kind of sick of being inundated with everything having to deal with Crosby, Ovy, and their respective teams. I think I’ll take a pass on this one, because I’m just going to be seeing them on the next 10 Versus games anyways." I have to cop to a certain amount of the same feeling. Why do I want to watch yet another Alex Ovechkin vs. Sidney Crosby commercial? Is there going to be anything in there the league hasn't already shoved down my throat? The answer is an emphatic "yes." HBO brings us a balanced and engrossing picture of the day-to-day ops of an NHL team, from the coaches on down to the AHL callups. Best moment of the first episode: former Thrasher Pascal Dupuis enter the Pens locker room and saying, "Good morning, boys.... f**k you, Geno."

4. Sidney Crosby, Alex Ovechkin, and Jeremy Roenick on The Price Is Right

Yes, yes, I know I just got done saying how these two guys are overexposed, but the real gem here is Roenick:

Is there any doubt that man was born to scream, "YOUR BRAND NEW CAR"? Obviously suits him better than being a hockey analyst.

It was a marketing campaign that drew just as much negative response as positive, but in the end, brought about the intended result. Philips Arena held its' largest crowd so far this season on Saturday night as the Thrashers dismantled the New Jersey Devils. It was an idea long in the making, and if it is a harbinger of efforts yet to come, I welcome it. Also, anything that gets a bewildered-looking Mike Mills into Philips, I'm for it. 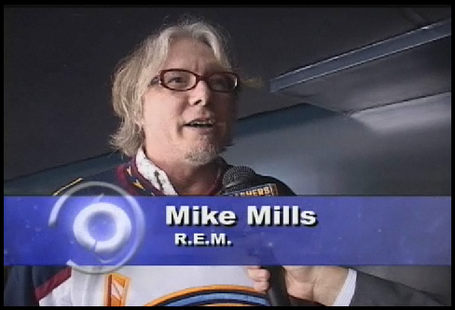 Averaging more than a game every other day, facing two divisional opponents, three OT games, two decided in the shootout, and walking away with six of a possible eight points. These Thrashers are here to compete, and the record bears that out.

What else was it going to be? There we're so many great things about this game, and most of them boiled down to numbers.

.682 - the Devils combined save percentage. While Martin Brodeur has looked decidedly more human this season, I don't know that anyone expected the Thrashers to hang four goals in fifteen shots on (arguably) the best goalie in history. Former Thrasher Johan Hedberg didn't fare any better, facing seven shots and allowing three goals.

3 shots, 3 goals - Just two of Eric Boulton's stats on a night he'll not soon forget. I've made no secret that I'm a big fan of the "Greek God" line; no, they'll never be confused with the Triple Crown Line, but these guys have long been good soldiers, doing whatever has been asked of them with the utmost effort. This is what makes Boultsie's hat trick all that more special.

0G, 0A - Dustin Byfuglien's stat line for the evening. Why is this good? This means other players stepped up and contributed, and reinforced the notion that this is a team and not a superstar & his supporting cast.

1G, 0A, -3 - Ah yes, that's the Ilya Kovalchuk we know and love. I'd be lying if I said beating Kovy's new team wasn't a large part of what made this game huge. It's kind of like running in to your ex who dumped you at the grocery store, then waving to her as you climb into your shiny new Dodge Challenger with your new fashion model girlfriend and peeling out.

17,000 - Probably the best part of the whole game. Seventeen thousand people descended upon Philips to watch their hometown team light up a legend and a couple of former teammates. Did the crowd contribute to those seven goals? Most likely. Can Atlanta be a hockey town? Absolutely.