We may need these points one day - best to try and save them.

It's tempting to blame a tough schedule (five games in seven days), or long work hours (the last two games going into overtime), or questionable officiating. But let's not. Let's just look at the schedule and remember: it's not yet the mid-point of the season, and there's still time. It's not exactly like the Thrashers just dropped one to the Islanders or anything; the Carolina Hurricanes carry a powerful weapon: 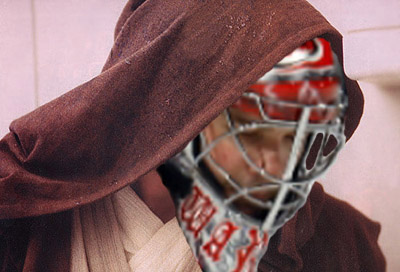 Cam Ward was pretty freaking Jedi tonight. He was motivated, having been chased from his crease by the Florida Panthers last night. They got him for three goals on five shots in under two minutes. We got him in a bad mood. Forty-seven shots, and only two goals allowed. That'll pad the ol stat sheet. But of those forty-seven goals, only six cam on the power-play, where there seemed to be a lot of indecision and shot fakes on the Thrashers part. Nik Antropov created a huge number of chances for himself, but just couldn't finish. Antro managed Atlanta's only shootout goal, just before Dustin Byfuglien decided to rip a slapper right at Cam Ward's chest - a questionable decision that failed just as spectacularly as it was executed. The two lineup changes for the Thrashers didn't seem to have any effect. Niclas Bergfors managed 7:40 of ice time (most of it in the first period) with two shots, and Ben Eager logged almost three times more penalty minutes (17) than on-ice minutes (6:22). Once again, the word of the night for the Canes was motivated. They too were a little worn out after playing in Sunrise last night, but put together a solid effort that eventually wore the Thrashers down. The two goals given up by Chris Mason would be hard to pin on him though, as they both came on what some might call fortuitous bounces: Brandon Sutter swatted in a floating puck, while Eric Staal fired a blind snapper from the slot.

So far in December, the Thrashers have managed 10 of 16 available points - not a bad pace, and certainly more than we expected out of this team. This season, they're on pace for 97 points, which puts them right in the mix for a theoretical playoff hunt. But they face Tampa Bay 3 more times, Florida 4 more times, and Carolina 6 more times this season. It's time to stop giving points away and take down the rest of the Southeast.

Here's your Postgame with Rammer: