You've heard it all before from Thrashers fans:

I've typically tried to address these concerns by responding to the criticisms on their merits: well, there are some good teams out there that win without spending lots of money. The Atlanta Spirit had a pretty solid team for awhile, though we've had some difficulties lately. Oh, and those big free agent signings rarely turn out to be worth what you pay. (Does anybody here wish we had signed Kovalchuk to that $101M contract right now?)

It struck me, though, that we could talk about this same problem using stats. What affect does a high payroll have on a team's winning percentage? How many standings points does an extra million dollars of payroll buy you? Or put another way, what does one point cost?

I've always felt that the return on investment for salary was relatively small, at least in hockey. Signing big-name free agents might be a good business decision if it gets butts in seats, but from a team performance standpoint, you don't get as much bang-for-your-buck. Still, I thought it'd be interesting to see what the numbers look like.

To test this, I pulled data from the 2009-2010 season and graphed points percentage by salary. Here's the data (with a nifty trendline added): 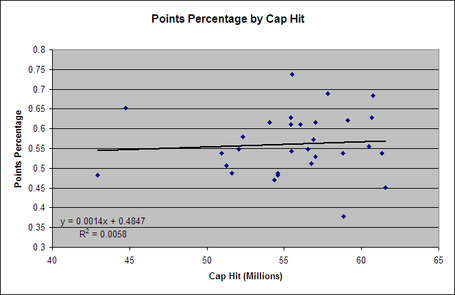 Yes, that trendline does head upward, but not very much. Based on the line, it would take an extra $9M to buy a single point in the standings. Yes, one point. The equivalent of winning a single game that would have otherwise been an overtime loss.

Stats nerds will have picked out the R-squared value of 0.0058 from that graph. R-squared is a rough measure of how well the data matches the trend. An R-squared of 0.58% is very, very low. In fact, it's so low, it's hardly any different from a completely random smattering of dots.

This is non-intuitive: spending more doesn't really mean winning more, at least not in a statistically significant way. It's true, though... at least for 2009-2010.

Where does this get us? Essentially, salary was not a major factor in how teams performed in any of the past three years. Spending more certainly does not guarantee you better performance. This is a tough pill to swallow for teams looking for a quick fix, but for Thrashers fans, this should be exciting: we don't need a big budget in order to perform well. We'll be able to compete with a low salary (at least statistically speaking.)

Next time somebody complains that we don't spend enough on players, fill them in: it's not the size of your payroll, it's how you use it.