If there's such a thing as a Thrashers rivalry, this one gets my vote. Things can get downright nasty between these two teams; here's but a small sample. 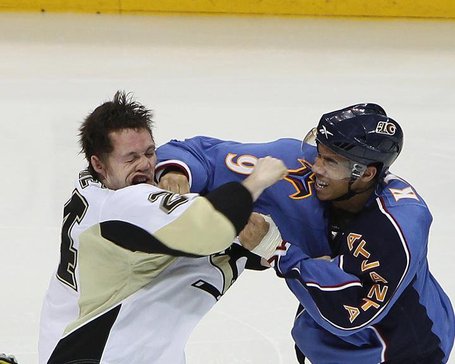 This one never gets old. Fred Johnson, you rule.

The Penguins roll into to town today on a high note, having taken one from the Tampa Bay Lightning last night, 3-1. It comes none too soon after a 2-5-1 stretch that had some questioning the direction of the team - but those kind of things tend to happen when you're the Pittsburgh Penguins. If the Thrashers can take advantage of a defense that has (at times) looked disjointed and unsure, the only thing between them and the red light dance is either journeyman goalie Brent Johnson or beleaguered starter Marc-Andre Fleury. Fleury picked up win #150 last night with some help from the crowd, but has struggled of late (2-6-0, .860, 3.23GAA). Meanwhile, the Thrashers enter tonights' game after one of their strongest outings of the season. Taking down the Wild 5-1, the Thrashers controlled the puck well and dominated a defense that has historically given them trouble. It's a different story tonight, as the Pens bring a much more "Eastern Conference" style of play into Philips. Fortunately the Thrashers will counter with some Western Conference muscle like Dustin Byfuglien and Andrew Ladd. Tonight makes for a good litmus test - will the Thrashers roll with the same poise they had against the Wild, or will we see them take the proverbial foot off the gas? C'mon down to the Bulb make some noise.

- Bryan Little makes his return to the lineup tonight after an extended absence due to concussion; Jimmy Slater gets the night off; and Ondrej Pavelec gets the start tonght.