The Thrashers had a golden opportunity to get on a hot streak in January as they played a string of opponents with a weaker record. But the team failed to maximize it's opportunity with a 1-0 loss of Florida and some brutal defense in a loss to Carolina. The team's record in January is just .500 and in a NHL with 3 point games, a .500 record will have you playing for gold in the spring. At the moment, the Thrashers sit 4 points out of the last playoff berth--which is not so far away. However, they also rank 11th in the conference which means that there are MANY teams in the mix for the playoffs.

In the table below I've ranked the Eastern teams by the current Points Won per Game Played (P %) and their total number of points they are on track to earn (Pts Pace). At the moment it looks like WSH, NJD, BUF and PIT have the top 4 locked up in the East. All four teams are on pace to hit 99 points or better. That leaves just 4 playoff berths and 9 teams still in the hunt.

At the moment the Rangers occupy the 8th and final spot and the team is on pace to finish with just 88 standing points. I wrote "just 88 points" because the typical 8th place team in the Shotout Era has finished with 93-95 points--so the Rangers are well below the historic number needed to qualify for the post season.

Now I expect two things to happen in the next couple of weeks. The top teams will let off the pedal a bit as they can cruise into the playoffs, and the middle teams will all start winning more points. Some middle of the pack teams will get red hot and pull away from the pack. I suspect that the final number of points needed to reach the post-season will be closer to 90 than the current 88 points which the Rangers are pace to earn.

If I am correct in guessing that it will take 90 points to get into the post-season, what must each team do to qualify? To answer that question I calculated the Point Winning Percentage needed to hit 90 points for each Eastern Conference club and the number of Wins it would take the rest of the way in the table below.

As you can see the top teams in the East could still reach the playoffs with a losing record from this point forward. At the bottom of the standings Toronto and Carolina are effectively out of the playoff hunt since they would need an improbably run of winning 75% of their remaining points (for comparison sake 1st place Washington has won just 70% of their points this season so far). If the Thrashers continue to drop point opportunities like they did against Carolina they too are going to be effectively eliminated from contention.

For the Thrashers to get into the playoffs they are going to need to step up their winning percentage to 61% or better the rest of the way. Below I have created a table showing the Thrashers team Win % for each month under Coach John Anderson's tenure. The Thrashers have only had two months where the team Win % exceeded 61% for an entire month--March of 2009 and November of 2009. To make the playoffs they are going to need to get that hot once again. The season is on the line, how will they respond? 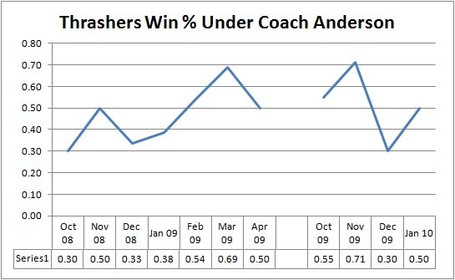