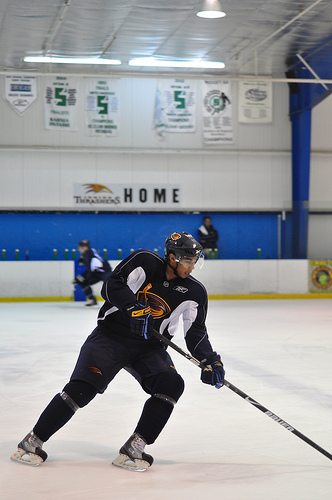 Thrashers Camp kicked off Sunday morning as three different teams took the ice. Many fans were there to check out the new faces and get excited about NHL hockey again. I saw scouts, front office people as well as fellow bloggers (Mr. Rawhide) and readers (thanks for saying hello). Everyone seemed to be in an optimistic mood to the extent that Team A skated off the ice to applause. Often teams have a motto or slogan for camp, I noticed several players wearing blue shirts that read "Make A Stand" walking around in street clothes.

If you're heading to out to camp, be aware that some players have switched numbers.

The Thrashers have installed safety netting aboard the boards that are adjacent to the stands in preparation for the two Prospects Games with Nashville on Monday and Tuesday. The netting is probably permanent according to one person I spoke with. If you are attending the Monday Prospects Game parking will be scarce! They distributed approximately 500 tickets and the Ice Forum parking lot probably only has the capacity for around 60 cars. They will have police to help direct traffic and will have parking at close by--but if you are attending I would encourage people to car pool and arrive early so that you don't miss any action.

After the jump, individual thoughts about the first day: 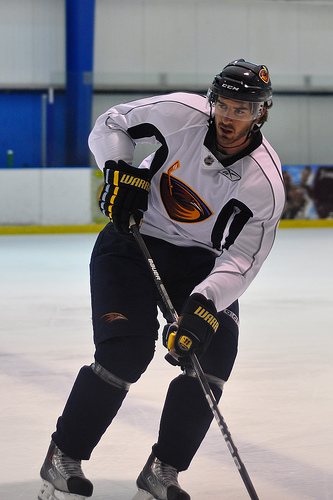 I always find it hard to learn anything at the first day of camp because I'm inevitably focused just on the new faces. One noticeable absence was Garnet Exelby who was drafted by the Thrashers in 1999. I don't know if Exelby attended the 1999 camp or not--but if he did attend this was the first Thrasher Camp without him in team history.

Random observations: The team certainly looks much bigger with Antropov and Kubina out there. Bryan Little looked shorter, but I'm sure he's the same height--the guys next to him are just larger than last year.

The players who have been working out at the IceForum looked very sharp and very comfortable. I thought Colby Armstrong and Eric Boulton both looked in mid-season form.

For a guy coming off of knee surgery Angelo Esposito looked terrific. He looked very quick and very fluid in his skating. I've been critical of Esposito in the past, but my hat is off to him today because it seems obvious he worked very diligently on his rehab. 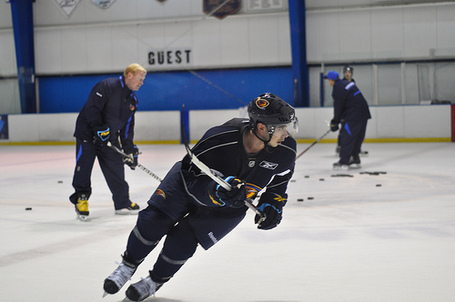 Grant Lewis is not as far along in his recovery for a knee injury (broken patella I believe). His skating has always been excellent but you could tell he was a bit tentative and not back to 100% just yet. As he came off the ice I asked him when he was able to start using it again and he said "only about a week".

Slava Kozlov looked particularly sharp. He schooled Salmela on a 2-on-2 drill. Then at the other end he scored off a shot and a tip--and then raised his arm in mock celebration.

Overall, I was very impressed with a lot of the guys today. In general, they were in great spirits and working hard, even the roster locks. This was good to see because last year, it seemed more of those guys kind of coasted. I swear I saw half the guys smiling, which means they were working hard, but also having fun doing so.

First off, I have to give it to Manny Legace. For a guy who looked like he took last season too personally, he really seemed to be having fun out there. He and Slava Kozlov were having a back and forth on each of Slava's shots. It was great to see the old camaraderie still there. The coaches were getting a kick out of it too. I only wish he was mic'd up like the 2008 All-Star Game as he was quite entertaining. And I must say, the guy's definitely still got it. He made some terrific saves; one a diving stick save right as the puck was on the line that had everyone oohing.

Jordan Lavallee looked great out there. He was quick and agile on the 3 on 2's and has a nice powerful wrister.

Riley Holzapfel looked completely out of shape. He was done about 30 minutes into the 75 minute skate. The final drill of 15 laps around the ice, was depressing to watch.

Ondrej Pavelec looked pretty good as well, and seems to be trying not to go down as quick. He's still doing it, but he appears to not be doing it as much. He also didn't like the laps at the end, but he finished them all, even while being almost a lap behind.

Pavel Kubina looks to have great positioning. He's always in a good spot although the swifter players that were able to get around him made him look like he couldn't skate. He's got a great stick though, so he should be fine.

Antropov is huge, yes, but he's also quick. He looked great out there in general, and was able to keep up with Kovalchuk and Little. Great reach. I hope there will be some chemistry developing.

That's all for now. Looking forward to see some more.