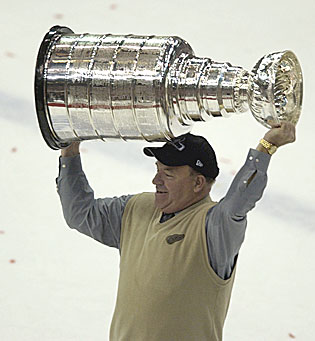 When Scotty Bowman was coaching the Red Wings, he had a reputation for being garrulous with press. Given that reputation, I was very surprised to see Bowman hanging out at the media rail for the majority of the two day NHL Draft chatting with reporters. He seemed relaxed and maybe even a little bored in retirement. I waited my turn on the rail asked him two questions about NHL rules. Bowman is a great thinker about the game of hockey, so I wanted his thoughts on how the existing rules might be improved.

On a personal level I had no idea what to expect from him. Scotty Bowman is a NHL legend and I'm a total stranger. So I was pleasantly surprised when he paused and really thought before he answered my 2nd question. He could have just given a perfunctory answer but he didn't.

Bird Watchers Anonymous: This last season the NHL adopted a new rule which required every initial faceoff of a power play take place in the offensive zone. This has had a big effect on team power play scoring rates. Where you surprised by this?

Scotty Bowman: No. Faceoffs are the hardest part in hockey to get equity. There's pressure on the linesmen to drop the puck. There are no perfect faceoffs. Teams have strategies--more strategy than ever--of putting out two good faceoff men on the ice at the same time. The guys all have moves and little tricks and you can't throw them out all of the time. I'm a bit of purist on that, I don't want to make a lot of changes in the game. That change was made in an attempt to improve scoring. No matter what they try, the defenses are [very good]. When you get down to crunch time, there is a lot of strategy. Coaches in the NHL are very qualified and everyone is doing their best to win the game.

Bird Watcher's Anonymous: If you could make one rule change in today's NHL, what change would you make?

Scotty Bowman: [after a long thoughtful pause] This isn't an on-ice rule, but I'd like to see them end the practice of letting the playoff finish determine the draft order. If you look at a team like Carolina, people don't realize that they finished 19th or 20th [in the regular season] but they're picking 27th--in EVERY round. They copied this from football where the Super Bowl teams pick last. But in hockey it affects every round of the draft. Let's say San Jose had the best team over 82 games.They didn't do as well in the playoffs, but over 82 games they were probably the best team. Now they get to move up a few spots in every round because of their playoffs. It has a long range impact.

As far as the on-ice rules go, I wasn't sure about removing the center red line for icings, I wanted to remove it when the puck was advanced to the top of the face off circles. But now teams work the stretch pass. It is a strategy to work the puck out of your end and just tip it across into the offensive zone. It hasn't become an offensive strategy at all--but a defensive one. Almost like a long dump in play.

The puck over the glass penalty bothers me as a coach. I wish they would let the referee determine if it was intentional or not. Some General Managers wanted it. Ken Holland and I we get along very well, but as a coach--if you're a man short and your guy dives to clear a puck and it goes over the glass--that's very tough to take. Their argument is that the skill players never get this penalty.

Conclusion: Thanks again to Coach Bowman for taking the time to talk about NHL rules with me. I was surprised to hear him bring up the draft order--but I totally agree with him on that one. The regular season is a better measure of a team's quality and the playoffs have a larger luck component to them. I'll have to disagree on the penalty for clearing the glass in the defensive zone--I like the fact that it is no longer a judgment call.