Share All sharing options for: Atlanta Shift Start Breakdown by Half Season

Yesterday's post on putting shot numbers into context ran a bit long, so today I'll continue on the same topic. The big takeaway from yesterday is that where a player's shift starts can have a profound effect on their shot differential. If you take shift start ratios into account you can figure out who is really helping or hurting your teams ES Shot Differential. Many of the players hurting the Thrashers will not be on the roster next season.

The one big point of concern was Ilya Kovalchuk. Throughout his career Kovalchuk has been a very productive point producer on the power play. The bad news is that Kovalchuk's Even Strength play leaves a lot to be desired historically speaking. This is one reason I've always been on the fence about Ilya. He fails to make routine clears in the D zone, he makes very risky passes in the neutral zone and in the offensive zone his line is often "one shot and done"--they rarely cycle and create any sort of sustained pressure on the opposition. Those mistakes turn into more chances for the bad guys and pucks behind our goaltenders. Ilya's play at ES has hurt his team over the years.

This is one reason I always liked Hossa over Kovalchuk--Hossa was a much more complete player--he could help you on the PP, PK and at ES. The bulk of Kovalchuk's value historically has been tied to his enormous PP minutes and the points he racks up with the extra man. To be perfectly frank, you can't expect to contend for the playoffs if your best player is not outshooting the opposition at Even Strength--and Kovalchuk had many bad habits that prevented that from happening.

Having said all that, we saw a "New and Improved Kovalchuk" after he was named Captain last season. His defensive effort went up another notch. He had more productive ES shifts than in the past. He seemed to cut down on long shifts and risky passes in the 2nd half. So was this Kaptain Kovalchuk really better? Let's compare the 1st half and 2nd half.

When you look at the graph below draw a diagonal line from the from the lower right hand corner to the upper left hand corner (I couldn't get my stats software to do what I wanted it to do here). If you click on the each graph and print the out you can draw the line from one corner to the other manually. The more a player rests in the Northwest corner the better he is, and the more a players tends toward the southwest corner the worse he is.

In the first half of the season the guys performing above average were: Little, Havelid, Enstrom, Kozlov, Reasoner, Armstrong and White. Exelby and Valabik sat right on the "average line" and everyone else was below it--Schneider, Oystrick, Throburn were way below it. Kovalchuk was also below that line. 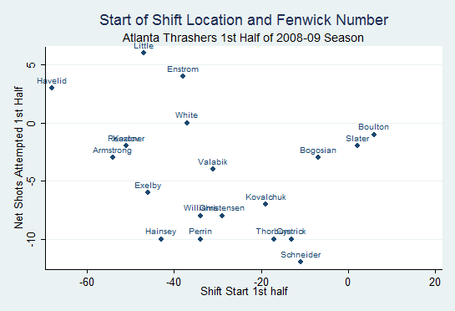 Now let's jump down to the 2nd half of the season. For non-Thrasher readers, Atlanta basically played very competitive hockey in the 2nd half accruing points at a pace that would have had them in the playoff race if they had done it for a full season.  Atlanta had an extremely good record when going head-to-head with teams scraping to get into the playoffs. They spoiled more than one team's March and April.

The team shot differential was still negative in the 2nd half (a bad sign) but it was not as negative as in the first half (a good sign). So which players had a better 2nd half? Oystrick, Bogosian, Peverley , Hainsey, and Exelby all moved in the positive direction in the 2nd half. A few players slipped backwards: Havelid, Little and Valabik. The impact of the Rich Peverley for Jason Williams roster swap can not be over stated--it was a big plus for Atlanta.

Ilya Kovalchuk moved from being worse than average in shot differential (given his start location) to team average in the 2nd half--an improvement over past seasons. What is even more impressive is that Kovalchuk had a less favorable shift start ratio in the 2nd half--and he still managed to improve his Shot Differential. Ilya showed improvement while swimming against the tide. If the Atlanta Thrashers get THAT Kovalchuk all next season they will have a much better chance of making the playoffs. 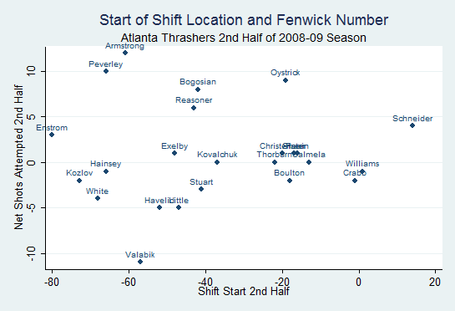 A few more observations about the 2nd half. The usage patterns become even more extreme for a few guys. Schneider was even more sheltered in the 2nd half than in the 1st. Enstrom replaced Havelid as the guy with the worst starting position ratio.

So how about the new guys? Let's see how the former Maple Leafs Nik Antropov and Pavel Kubina did on their club in 2008-09. The Leafs had 4 skaters who received the most difficult shift start ratios and Kubina was among those four--and Antropov wasn't far behind him. Again, if you draw a diagonal line from the lower left hand corner to the upper right hand corner, anyone above that line (in the North West part of the chart) has a better than average shot differential relative to their faceoff starting ratio. The good news for Thrashers fans is that both Kubina and Antropov are in the good part of that chart and should help the team at ES in the coming season. 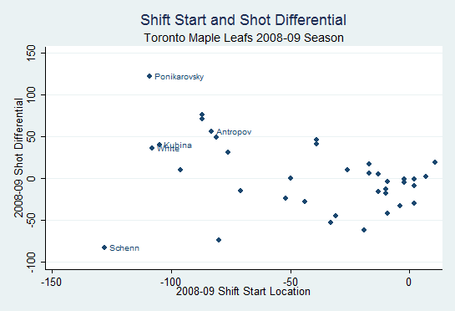 Conclusion: If the Thrashers want to contend for the playoffs they must improve their shot differential at Even Strength. The good news is that the Thrashers will not be bringing back most of the players who were holding them back. The new additions should also nudge them in the right direction. And as Captain Kovalchuk showed improvement in his ES Shot Differential as well.