Faceoffs: Where You Start Matters

Share All sharing options for: Faceoffs: Where You Start Matters

A few years ago Vic Ferrari created a great site called Time on Ice that scrapes shot data and faceoff data from the NHL.com play by-play-game reports. The Oiler bloggers have taken the lead on using this data and some interesting trends have emerged as people have worked with it for the last few months (which teams D had biggest faceoff ratio splits, the progression of young Oilers , adjusted Zone Shift)

One big step forward for quantitative hockey is the ability to parse out Even Strength Ice Time. If you watch hockey you already know that a player who plays head-to-head against the opposition's leading scorer has a much tougher task than if he faces the opposition's 3rd or 4th line. Some efforts have been made to measure who receives "tough ice time"--including my own look at who which Thrashers got the most minutes against top scores in the SE Division.

Now how can we use that model to figure out which individual players on a team's roster are helping that club win games? The first step was a focus on ES Shot Differential when each player was on the ice. Shot Differential is one measure of where the puck is located and whether the good guys are putting more pressure on the bad guys or vice versa. Measures of Shot Differential come in three flavors:

Now looking at shot differential when each player is on the ice is useful but it has a very serious limitation. Not all ES shifts are the same. We already know that a player faces an uphill battle when they are matched against an offensive superstar, but another definition of "tough ice time" is a player who gets more than his fair share of shifts that start off in the defensive zone.

Why should we care so much about where a shift starts? As Gabriel Desjardins demonstrates very clearly in this article, the team that wins a faceoff in the offensive zone enjoys an HUGE advantage in the first few seconds after the faceoff. Even if your team WINS the faceoff deep in their defensive zone they are still more likely to allow a shot against then if they LOST a faceoff in the Neutral Zone. In other words, no matter who wins the D Zone faceoff, bad things are likely to happen for the defending team.

Desjardins teases out the causal mechanism:

After you lose a faceoff in the neutral zone, you have time to set up defensively and you don’t give up a particularly large number of good scoring opportunities. However, when you lose a faceoff in your own end, opponent shots on goal go up so quickly that it’s as though you gave the other team a 10-15 second power-play. For several seconds, the rate of shots allowed is as high as it is on a 5-on-3. The prospect of this level of defensive disadvantage, particularly late in a one-goal game, must give coaches nightmares.

That is simply staggering when you think about it. If your team losses a D-zone faceoff they are more likely to allow a shot on goal than they would while killing off a 5>3 disadvantage. Holy cow!

Clearly shift start locations matter. If the coach sends Player X over the boards more often for D-zone faceoffs and shields Player Y from those ugly starting locations it could have a profound effect on that player's ES Shot Differential. So do coaches match players to faceoff location? Certainly coaches will send out Center with a record of faceoff success in those situations. But what about Wings and Defense?

My personal intuition was that over the course of 82 games and literally hundreds of shifts there would not be a big effect. I figured that coaches might make some strategic choices late in close games, but over the long run there would not be a huge difference...and I was wrong to assume that. Let's look at some data.

Below I have the Atlanta Thrashers defensemen for the 2008-09 season. During the last season Mathieu Schneider had the most favorable ratio of shift starts. He has a +3 which means that he had 3 more Offensive Zone shift starts than Defensive Zone shift starts--every other Thrasher defenseman had a negative number. Four defensemen had a more favorable shift start ratio and five had a much less favorable ratio. The Swedish D pairing of Havelid and Enstrom really bore the brunt of the tough shift starts last year each finishing with 100 more bad starts than good starts (and they both finished plus for the season which is pretty impressive). Clearly the Atlanta coaching staff protected the Schneider-Bogosian, Schneider-Oystrick D pairings from tough shift starts last year.

How about the forwards? The defensively responsible trio of Kozlov, Armstrong and White were handed the toughest shift starts by the coaches last year. When you consider how many times Armstrong started a shift at the wrong end of the ice, it becomes even more impressive that he led the team with the best Shot Differential among the all forwards. Little and Reasoner also began a large number of shifts in the tough end of the ice. 3rd liners Crabb and Stuart got their share of toughs starts when you factor in that each played roughly half a season in the NHL.

Who was protected by the coaching staff? Two forwards who struggled and were later traded away (Williams, Christensen) and the Thrashers 4th line. The "Greek God" line of Boulton-Slater-Throburn received some of the most favorable shift start ratios from the coaching staff. I've already written about how grossly over rated this line is by fans and some media. Clearly the coaching staff was not fooled. They were afraid to send them out for D-zone faceoffs.

In general, I'm happy with the Thrashers off season moves, however, the Thrashers had a big opportunity to upgrade this part of their roster over the summer but chose to re-sign Slater and Throburn--two players who are not good PKers and not very good at at ES either. This was a big missed opportunity. There are rumors that Manny Malhotra has a standing offer from the Thrashers--at least he would add a solid PK and faceoff guy to a team that bady needs to improve in those areas.

So now for the really exciting part. This is where we "contextualize" the numbers. We know that good players tend to play in the other offensive end and tend to out shoot the opposition. But on a weak team like the Thrashers, often the good players start off their shifts way down at the wrong end of the ice. So what happens if we combine these two stats? Well the chart below is what happens.

As you look at the chart below below you, draw a mental plus sign on the table and divide it into four quadrants. In the upper left hand side are the difference makers. The players located in the upper left quadrant are guys who started off in bad location but did much better than their teammates in shot differential despite their crappy starting location. Colby Armstrong, Tobias Enstrom, Marty Reasoner, Bryan Little--these are the four players "driving the bus" at Even Strength last season--they rose above their lousy shift location.

In the lower right, we have the "Quadrant of Shame"--these are the guys who had better than team average shift start locations but still managed to be out shot by a margin that was larger than the team average. This is the dead weight slowing the bus down at ES: Schneider, Thorburn, Williams, Perrin, Christensen, Kovalchuk, Crabb, Boulton, Slater and Perrin. The good news is that many of these guys slowing down the bus are gone and will not return. The bad news is that the 4th line is back and Ilya Kovalchuk's name is on this list (I'll have more to say on that in the next post).

The final two quadrants, the upper right and lower left are guys who did about average. The upper right contains players with favorable shift starts who produced better than average shot differentials (Bogosian). The lower left has those players with ugly shift start locations and who ended up with some ugly shot differential numbers as a consequence (Hainsey and Exelby). 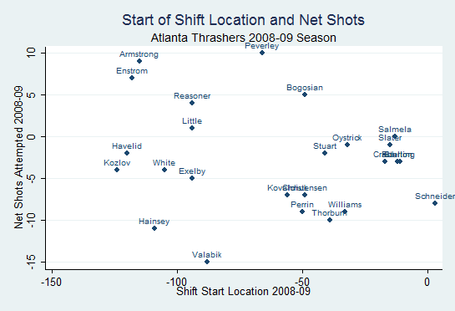 (BTW: If you want to look at the chart in more detail you can click on it and print it out.)

Conclusion: The really cool thing about the new NHL data analysis is that we can begin to break down the Even Strength play in a much more sophisticated manner than in before. Not all ES Ice Time is equal. Some guys go head to head against the top scorers in the league. Other guys get tough ice time because they start more shifts deep in their own end. With these new tools we can identify and appreciate the guys who handle this tough minutes.