Atlanta Metro on the Verge of a New Ice Rink

Share All sharing options for: Atlanta Metro on the Verge of a New Ice Rink 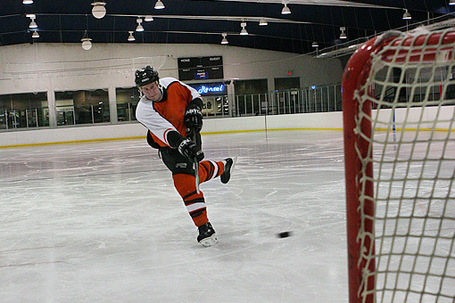 When I moved to Atlanta in 1996 there were just 3 sheets of ice in this town. The Ice Forums at Kennesaw and Duluth and the MIC in Marietta, GA. (When I first started playing you got off at Boggs road to go to the Duluth Ice Forum and I think there only two gas stations between the exit and the rink--that area has seen masive change.) Not long after I arrived the metro area doubled it rink capacity from 3 to 6 sheets of ice. The Cooler was constructed with its 2 ice sheets and one roller rink. Then when the Thrashers came along, the Duluth Ice Forum added a second sheet for the Thrashers practice ice. Since 1999 the city has remained at 6 sheets of ice available for local hockey leagues.

In the last ten years the Atlanta metro area has added nearly 1 million new people including numerous northern migrants (like me) who arrived looking to play hockey. The arrival of the NHL Thrashers also stimulated hockey among native born Georgians. I can think of three people I know who started off going to Thrasher games and then decided to play hockey as adults (Interesting all three of those people ended up choosing to spend their money on their own hockey and let their NHL season tickets lapse as the team failed to put a compelling product on the ice). I don't have much contact with the high school hockey leagues, but it appears to me that they have grown as well.

Local adult hockey leagues have grown significantly in the last decade. I play in the largest adult league in town (AAHL Open League) which has close to 50 teams and 8 different skill levels. The growth of adult hockey leagues and the rise of youth and high school hockey has continues to put pressure ice time around town. This summer the MIC was down for repairs and as a consquence the Open League schedule has been pushed back much later into the fall than in previous seasons.

In the ten years since the Thrashers practice sheet was added in the late 1990s, I have heard constant rumors about new rink construction. At one point there was some talk on an inside-the-perimeter rink, and I've heard a LOT of talk about a new Kennesaw rink that the KSU college team could use. There was even the strange case of the southside rink that was built and opened only to cease operations very quickly. I never even set foot inside of it and have no idea what happened in that situation. I do know that the southside rink was too far from the northern rinks for leagues to buy ice time and shift games to that location.

My understanding is that it will have a single sheet of ice with the capacity to expand to two at some later point if the owners wish to go that route. This is good news for the local hockey playing community. It should relieve some of the pressure for evening ice times for the adult leagues and it also provide more times for youth leagues as well. Hopefully, more details will become available soon.