Let me being my noting that I am philosophically opposed to spending a draft pick on a fighter/tough guy. I think that should be the responsibility of your pro scouts and not your amateur ones. So when the Thrashers took Cody Sol in the 5th round when other skill players were still available I was disappointed.

However, having watched Cody play at Thrashers Prospect Camp for several days I can say that he brings more to the table than your typical one-dimensional tough guy that the coach hides on the 4th line because he lacks talent. Sol has good size and decent puck skills. When I think about past tough guy prospects who have come to Prospect Camp, Sol is way ahead of some of his predecessors in basic skills like passing and skating.

He plays a regular shift on defense in Saginaw. As a defenseman myself, I tend to pay more attention to some of the little things. I'd say Sol's play has been one of the quiet surprise stories for me at this summer's Prospect Camp. Tough guys are often viewed as stupid oafs, but when I watch Sol play I see him making good reads and intelligent passes. If anything, Cody might be selling himself short when he describes himself as an enforcer--he might have a future as a defensive defenseman. 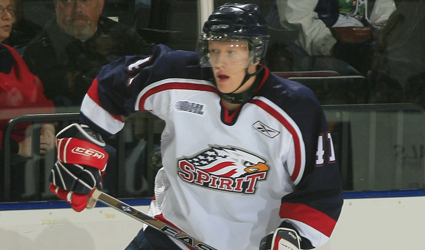 He's on your roster for one reason and you can find it in the penalty minutes column. I mentioned in one scouting report that 'this guy had more fights in one game than goals in the entire season' He has the one punch capability, but he can take a few and wait for his opportunity. His offensive skill set is almost non-existent, but he's a defenseman and he is not there to score but to move people people out of the crease.

Don Waddell on the Thrashers addition of toughness to the prospect pool.

BWA: It seems that this draft you added a number of players who bring some toughness...was that a priority?

DM: You’re always looking for some players who play with a bit of an edge. You want guys with that grittiness and that compete factor. Sometimes they’re just not there when it is your turn to pick, this year they were more of those type of players in this draft and they were near the top of our list when it was our turn to pick.

BWA: Can you tell me about your season? We don't get a lot of OHL coverage in Atlanta, GA.

Cody Sol: I started out with Saginaw this year and played a full season there. I got 7 points and 128 penalty minutes. I like to be the enforcer on my team and protect my teammates.

BWA: What was your best scrap this season?

CS: Richard Greenof, from Windsor Spitfires. [You can watch it by clicking on this link to www.hockeyfights.com]

BWA: What is your strength as a fighter?

CS: I have a long reach. My punch is pretty hard.

MQ: Who was your favorite player growing up?

CS: Chris Pronger was probably my favorite. He intimidates players and uses his size well. Also Bobby Orr has always been a hockey hero.

BWA: What part of Ontario are you from?

CS: Woonstock Ontario just in between London and Toronto.

MQ: What was going through your mind while you were waiting for your name to be called?

CS: Well I had a couple of teammates who went before me so I was really happy for them. Jordan Scwarz went to Phoenix. When they started to go I starting to get really nervous but when I heard my name--my family was really happy.

MQ: Ed Pasquale said his heart starting racing when he heard "Saginaw" but it was a teammate who was selected.

CS: Yes, the same thing happened to me. Two guys [from Saginaw] were picked in front of me, so it was up in the air. I'm just glad to be going to the Atlanta Thrashers.

MQ: How many times did you talk to them?

CS: I didn't talk to them. A lot of scouts were at the games so that helped.

BWA: Did you have a team pool to see which Saginaw player would go highest in the draft?

CS: Oh we joked around about it. But we hoped we would all get drafted and it is a good day for our organization.

MQ: Do you have family members that are athletes?

CS: They all play hockey, but none of them at a high level.

BWA: Can you talk about your development so far and things you have improved upon?

CS: My puck handling skills have really increased over the last two years in Saginaw. My skating is better too--my speed is better. Hopefully I can get my speed up to NHL level.

BWA: Can you talk about how you are used on your team and the roles you play?

CS: I play a lot of penalty kill, a lot of pressure situations in the defensive zone. Coaches rely on me to make a good first pass out of the zone. Of course I also am there to protect the skill players if other tough guys go after them.

MQ: What do you need to work on to advance to the next level:

CS: Well, my puck handling skills have never been the greatest but I hope to get up to NHL standards. For a big guy I think my skating is pretty good--I'm a smooth skater.

BWA: What do you know about Atlanta?

CS: Not much other than the Braves and Thrashers are there.

BWA: I grew up in Michigan--what's the greatest thing about living in Michigan? [half joking]

CS: [long pause to think of something positive to say] ah, all the football games we get to play.

BWA: Any hobbies and interests away from the rink?

BWA: If you could pick just one person who has really helped you along as a player, who would that person be?

CS: I'd say my father. We've been close the whole time that I have been growing up. He's never pushed me to play hockey--we've had a great relationship through hockey.