Ben Chiarot was one of two OHL players selected by the Thrashers in the 4th round in Montreal. His team the Guelph Storm finished 2nd in their division and qualified for the playoffs. They were eliminated in the 1st round. Chiarot finished 2nd on his team in Penalty Minutes and 2nd on his team in Plus/Minus (He ranked first among the defensemen). He takes pride in bringing some nastiness to the game. 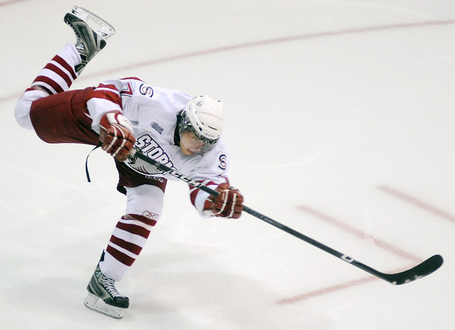 We spoke to the Red Line Report OHL scout on Ben Chiarot and here is his opinion on Ben:

He is a solid defensemen. He's a little slow footed, but he's a gamer. If he could improve his foot speed that would make everything else a little bit better but he's not afraid to initiate contact and he will do what needs to be done. I like that as an old defensemen. I was drafted by Philly in 1977 and it wasn't because I had good hands [laughs]. I see some of that in him.

We talked to Thrashers GM Don Waddell about him right after the draft:

BWA: An acquaintance saw Ben Chiarot play in the OHL and said that he’s not spectacular but very steady, did you have a similar assessment?

DW: Absolutely. He’s 6’2" right now—a BIG kid. He’s got good feet. He’s a very competitive kid. You’re not going to watch him and think "wow" because he’s not a goal scorer, but you need quality shutdown defensemen and they’re hard to find.

And also to Dan Mar Direction of Amateur Scouting:

DM: We think he’s under rated. He plays in a Geulph where the players must play strictly within the system. There are no "green lights" that allow you the freedom to do want want with the puck. But he has great feet. He’s big and strong and tough. Nobody is going to gain an edge on him—in a one-on-one battle he would give Zach Bogosian a rough time.

MQ: How does this feel right now?

Ben Chiarot: It's great! I going to Atlanta which is a good team. I'm happy with where I was went. It was a little bit of a wait.

MQ: Did you have any idea Atlanta might be in the mix for you?

BC: I met with Atlanta a couple of times but you never really know for sure. They had shown the most interest with three meetings, so I knew they liked me.

MQ: Could you talk a little bit about the Guelph program in general?

BC: We've had some great defensemen come through Guelph during my career, Mike Caruso, Drew Doughty, Ryan Perrin. All guys that I've been about to learn from. The coaches can pass on to me the same things they taught them. So its a good situation as a defenseman.

MQ: For fans in Atlanta who have never seen you play, how would you describe yourself?

BC: I'm a physical defenseman. I will stand up for my teammates when I have to. I like to jump up into the rush once in a while and create some offense. I try to make it a two way game.

BC: I'd say a mix, I'm big and I'm usually one of the fastest guys on the ice.

BWA: You said you're not afraid to mix things up, what was your best fight this year?

BC: This crazy guy from Oshawa [Tyler Taylor] hit my D partner from behind so after the whistle I said "we've got to do this" and so we squared up and the buckets flew off and the crowd went crazy. [You can watch this fight at www.hockeyfights.com]

MQ: Who was your favorite player growing up?

MQ: Were you a Leafs fan growing up?

BC: Sure, we watch the Leafs every Saturday night.

BWA: Can you describe your season in the OHL?

BC: We had a young team in Guelph this year. Eight guys with 1991 birth years so we should be contenders in the next two years.

BWA: Given the youth of your team, would you say you took on a leadership role?

BC: Yes. In your first year you look up to the older guys and with time you step into that role. I expect to be a leader next season.

BWA: As a defenseman would your strength great positioning or more one of physical play and intimidation?

BC: More intimidating. I want guys to not like coming down my side or into my corner.

BWA: I assume you receive a large share of penalty kill time?

BWA: If you could mention just one person out of your coaches, teammates and parent who has helped you advance as a player?

BC: I would say my dad, he's been behind me my whole career. My parents live in Toronto about 45 minutes away and I played minor hockey in Toronto and he was driving me five nights a week.

BWA: Does sports run in your family?

BWA: Personal goals for next season?

BC: I'm aiming to put up more points next year and play a bigger role next season.