Because of the Mathieu Schneider trade the Atlanta Thrashers gained an additional pick in the 2nd round of this year's NHL Draft. With that extra pick they selected Jeremy Morin an American player who spend the last two years playing with the U.S. National Development Team in Ann Arbor Michigan. The purpose of the USNDT is to combine high quality coaching and instruction with good facilities and resources so as to accelerate the development of young American prospects.

Morin was ranked as a possible late 1st round or early 2nd round pick by publicly available lists. Red Line Report had him at #15, International Scouting Service at #27, McKeens at #37 and NHL Central Scouting had him at #33 among North American skaters.

I spoke to Kyle Woodlief right after the Thrashers picked Morin and he had this to say "If Morin is in the NHL he's a first line guy who can score 40 goals. Skating is his main issue. He reminds me a lot of Ray Sheppard--who couldn't skate a lick and still ended up with nearly 400 goals in the NHL."

Here are some additional comments about Morin from the RLR Draft Guide:

Deadly from the circles in with a lightning quick release on an accurate shot. Can be contained for 57 minutes yet still will win the game for you. Lacks first step burst and stride is ugly, but always gets where he needs to be due to great anticipation and shows good balance. Hellacious one-times on the PP.

Below is a video clip on Jeremy Morin

I asked Don Waddell if he was worried that Jeremy Morin would still be available for the Thrashers second pick in the second round:

Oh, you’re always worried, but we had other guys on our list that liked a lot. The draft was very deep at the top this year. But we had Klingberg and Morin ranked almost back-to-back.

Dan Marr had this to say right after the draft:

As for Morin, he can take the puck from the corner to the net like a Bobby Ryan. He’s still maturing physically, he’ll get stronger. He skating has continued to improve and next year he’s headed to a strong program in Kitchner where he will get lots of games and lots of practice time. They have a good track record of developing players.

So both are on a good path of development and we look forward to them filling some roles in the future.

Media Question: What sort of NHL player would do you model your game after?

Jeremy Morin: I would Thomas Vanek [Buffalo Sabres] he scores a lot of goals.

MQ: Did you play a lot of special team last year?

JM: Yes, I did. I think of myself as a Power Play guy.

MQ: What would you say your greatest strengths are?

JM: Shooting the puck and scoring goals I guess.

Bird Watchers Anonymous: What does a Jeremy Morin goal look like? Can you describe it for Thrasher fans who who have never seen you play?

JM: I can score from anywhere. I never get too close, maybe the top of the circle. Any time I get the puck I like to shoot it.

(more after the jump)

BWA: Can you describe your season with the National Development Team? I watched you play at the Under-18 Championships and I assume winning there was a big highlight for you?

JM: The Under-18 tournament was a strong finish to the season for us. To win the gold medal in front of the home crowd was great. It was a long season. We go through a lot together in two years. To cap it off like that was awesome. 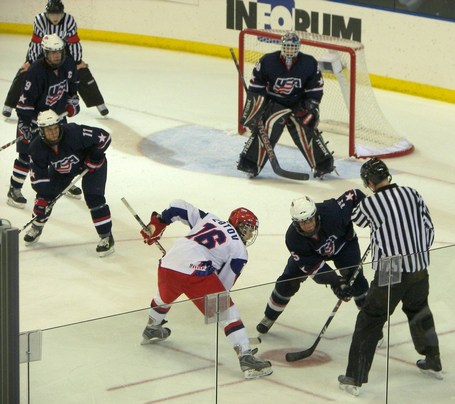 BWA: I interviewed your line mate Kevin Lynch and he said your line had tremendous chemistry much of the year.

JM: We had great chemistry as a line. It just happens sometimes--everything jells together--and that certainly happens at the worlds.

BWA: The Red Line Report had many positive things to say about you, but they mentioned that some scouts were not satisfied with your skating? Is that an area you intend to work on?

JM: Yes, definitely. Anyone who wants to make it to the next level has to improve in some area, and that's something I have to improve. Over the next couple of years I'll get stronger as I mature and it will even out.

BWA: What's next on the horizon for you next year?

JM: Next year I will play for the Kitchener Rangers in the OHL and I'm looking forward to that.

BWA: Where part of the United States are you from?

BWA: Did you grow up a Sabres fan living in upstate NY?

JM: No, I've never really been a Sabres fan. I was a Rangers fan a little bit.

BWA: In your career have you faced any major adversity? Perhaps an injury?

JM: I'd say this last year I had some adversity. I probably didn't have the best year that I could have had. No major injury setbacks.

BWA: Did you have any idea that Atlanta was interested in picking you or was it a surprise?

JM: I talked to my agent abut that, but you really have no idea who is going to take you. There a couple of teams that seemed interested but then they didn't pick me--so you just have to keep a positive attitude. It worked out well. I'm excited to be an Atlanta Thrasher.

BWA: Was it a long wait, I know some people had you ranked as a late 1st rounder?

JM: It was a long night, but it's over and I'm happy where I am.

BWA: Do you have interests of hobbies away from the rink?

BWA: Well, you're going to love Atlanta then. They have great courses and you can golf year 'round.