Share All sharing options for: NHL Draft Round 2: Thrashers Take Klingberg and Morin 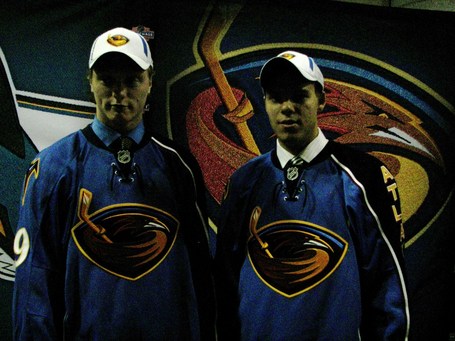 Thrilled with the Morin pick (I would have taken him at #34. Klingberg will bring some much needed sandpaper to the Thrashers. This guy LOVES to hit people--his upside is a Tomas Holmstrom type with perhaps less hands and more physicality.

Kyle Woodlief is in our row in the press area and asked him for some quick highlights:

Klingberg "really gritty tough winger who loves to punish people--North American style player. He will be a checking line player in the NHL"

Morin "2nd best sniper in the draft, skating is a question mark. If he makes the NHL he will be a 1st line with 40 goal potential because of superb hands. Reminds me of Ray Sheppard who couldn't skate a lick but scored a lot of goals in the NHL."

Klingberg mentioned that he knows Nicklas Lasu another Thrashers prospect playing in Sweden. Ben Wright just tweeted that Zach Bogosian knows Jeremy Morin--it sounds like we have some logical room mate situations for NHL camp if they are all there.