How to Build a Cup Contender in Atlanta, Part 2

Share All sharing options for: How to Build a Cup Contender in Atlanta, Part 2

I'm going to start off by making a statement that may shock some readers. I don't believe that the measuring stick for good management is whether you win the Stanley Cup or not. Why not? Because I don't believe that there is any sure fire way to guarantee a Cup championship and therefore defining success as "Win Stanley Cup" is not the correct yard stick. Now some of you are no doubt scratching your head and thinking "Falconer spent too much time in the sun today." But let me explain the logic behind that my position.

Every NHL owner and every NHL GM probably day dreams about winning the Cup and seeing their name engraved of it for posterity. But the cold hart truth is that many high quality teams fail to win the Cup. This happens all the team. The amazing Flyers teams of the mid 1980s were shut out because the Edmonton Oilers won 5 Cups in 6 years. In terms of talent that Flyers team was certainly Cup worthy. In recent years the Ottawa Senators probably assembled a Cup worthy roster over a five year window--they made it the Finals once, but lost to Anaheim.

The reason I don't consider winning the Cup the correct measuring stick is that in the playoffs LUCK looms very large. Think about this--as the talent gap between two clubs gets smaller--luck becomes a bigger factor in deciding the outcome. During the regular season if the Detroit Red Wings played the New York Islanders 7 times Detroit probably wins 6 even with a poor effort because Detroit was just that much more talented than the Islanders. However, in the playoffs nobody see the Islanders anymore.

Consider for a moment the last two Stanley Cup Finals where the same two teams where matched up. In 2008 the Penguins where the injured team and they had to dress NHL rookies in the Cup Finals (not an ideal time) and Malkin looked like a guy who was either hurt or extremely tired. In 2009 the Red Wings were without their MVP for four games in the finals and their captain was playing with a set of badly bruised family jewels. I'm not saying the series was decided entirely by injuries, but in the playoffs when the talent level is much closer, small differences like health and luck play a much larger role in a short playoff series--not all great teams win a Cup. By all rights the San Jose Sharks should have a Stanley Cup by now, they assemble a good-to-great team every year.

So if there is no sure fire strategy for winning the Cup, that can't be your measuring stick for ownership/management. The correct measuring stick is have they build a Cup worthy team? Now this gets us to the heart of our topic: what does a Cup contender look like? How do you know if you have one?

Now some people will argue that a Cup winner should be built around a great goalie, or defense or two dominant centers and so on. When I look at the data I see great offensive teams and great defensive teams have won the Cup. The Cup has been won by amazing goalies and good-but-not-amazing goalies. The Cup has been won by lots of different types of teams, therefore I don't believe that there is just one blueprint, consider for a moment how different the 2007 Ducks and 2008 Red Wings were from one another.

What does a Cup contender look like then? One way to answer that question is to look at past Cup winners. That can give us a feel for a victorious team looked like. Below I have created a table that lists every Cup winner since 1980 with their final regular season ranking and their final conference finish and their playoff goalie. I started with 1980 because that is the year the NHL expanded the playoffs to the current 16 teams. During this time period the NHL went from 21 teams (1980s), to 26 teams (early 1990s) to 30 teams (late 1990s). Back in the 21 team NHL only 6 clubs missed the playoffs while today nearly half the teams miss the post-season.

At the other end of the scale not one single team has won the Cup that finished in the #9-#16 spots, the lesson here is that clubs that struggle to qualify for the post-season never win the Cup., if you want to win a championship you have to come in the front door. Home ice advantage appears to be a key requirement for the NHL playoffs. The biggest "upset" winners (in bold in the table above) were the 7th place 1992 Penguins, the 9th place 1995 Devils and your current Stanley Cup champions the 2009 Penguins. (I'm not sure what to make of the Penguins owning 2 of the 3 "upset" Cups in the last 30 years.)

The road to the path to the Stanley Cup requires a high quality team that starts the post-season with home ice advantage. 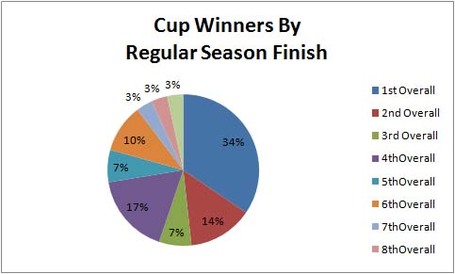 So far I've argued that the mark of a well run franchise is not a Cup championship but the ability to assemble a Cup contender and I've defined a contender as a team with a top 6 finish during the NHL regular season. Just for fun here's a table that shows which organization have met my criteria in the four post-lockout seasons.

If you follow the NHL closely you will not be surprised to see Wings, Devils, Sharks and Ducks ranked among the "well managed" clubs, Detroit has fielded a contending club all 4 years, the Sharks ranked in the top six 3 out of 4 seasons and the Devils and Ducks met our criteria twice each.

You may (or may not) be surprised to find that the Predators, Sabres and Stars made this list twice. The Sabres and Predators are proof positive that teams with smaller revenue streams (like Atlanta) can still contend under the current CBA (I'll have more to say about Poile soon). His skill at putting together a competitive team on a shoe string budget year after year is very impressive. In Part 3 we will look at the financial playing field under the current CBA and what type of team the Thrashers should be assembling.

Conclusion: The best measuring stick for a well managed NHL franchise is not winning the Stanley Cup but rather fielding a team with a legitimate shot at winning a Stanley Cup. Basd on historical trends 90% of Cups have been won by teams that finished the regular season in the top six spots in the overall standings. If they Thrashers hope to contend for a Stanley Cup they can not just squeak into the playoffs and hope for a miracle--because miracles are extremely rare. Rather they need to roll up their sleeves and construct a quality roster that is capable of finishing the season in the top six of the whole league.