SB nation is conducting a 1st round mock draft heading up to the actual NHL Draft on June 26th. The Thrashers have the 4th overall selection. 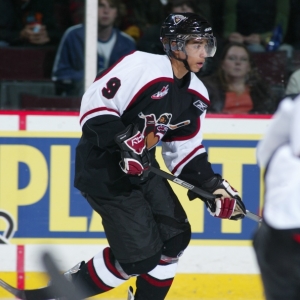 At the 4th spot the Thrashers choices really boil down to Evander Kane or Braydon Schenn. Both forwards are from the WHL major junior league. Schenn is viewed having a well-rounded two-way game, while Kane probably has more offensive upside. I think the Thrashers will take Kane and I'll have more to say about him after the jump.

The Thrashers have put together a brutal nine season run that compares to Tampa Bay's eight years in the wilderness before they assembled a Stanley Cup winning team. Seeing Ilya Kovalchuk score goals in yet another home team loss doesn't sell tickets, so the team is under great pressure to contend to staunch the flow of red ink.

Given those economic and historical realities I think it is unlikely that the Thrashers would take either of the two talented Swedes likely to be available Oliver Ekman-Larsson and Magnus Paajarvi-Svensson. Both would prefer to stay in the Swedish Elite League until they are NHL ready. The Thrashers need talent now and they could benefit from an English speaker who is comfortable doing fan and media relations work. When BWA interviewed GM Don Waddell back in April at the World U-18 Championships, he had this to say:

Don Waddell:  "There's a difference too between a junior player and a European player--a junior guy you can play some games before you make a decision on him, while a European player you don't have that luxury."

When I asked Don Waddell about his off season priorities for the Thrashers he mentioned that the club was looking for a top six forward who has some size and can cycle the puck. Do the Thrashers think either of Kane or Schenn could step into the NHL next year? Do you think either could handle top six minutes?

DW: "Probably. There is one guy that I can see fitting him into our lineup and giving him a chance."

The big question is which player do the Thrashers see as able to step into the NHL at the tender age of 18 years old? While Waddell didn't come out and rank the players, when I asked him about the top end of the draft, he reeled off the top prospects (see quote box below) and he mentioned just one player's first name. Was that a poker tell, or just an random accident? I suppose we will find out in 10 days.

DW: Well assuming that Tavares and Hedman are gone, then you're got a crew of guys right there. You have Schenn's brother, you have Duchense, you're got Evander Kane, you're got Cowan the big defenseman who got hurt out in Spokane and then throw the two Swedes in there. We're going to get a good player.

What Evander Kane could bring to the Thrashers

His stickhandling is considered to be his best attribute by many. He can also score the puck--his 48 goals ranked 2nd in the WHL this last season. He is considered a plus skater as well. He can also bring a physical dimension to the game. At age 17 he is already 6'0" 180 lbs. He grew two inches over the last year alone. Over the next 5-7 years he will get bigger and stronger and could become more of a power forward. He also is not afraid to drop the gloves now and then, you can check out a couple of his fisticuffs over at hockey fights.com (with a first name like Evander you must have some fight in you!)

I've been doing some work on a rough forecasting model for prospects, and one thing that often marks an elite player is the ability to play at a young age and to show dramatic improvement from one season to the next. Evander Kane played regular season games as a 15 year old with the Vancouver Giants and he dressed for several Memorial Cup games when they won the championship. (Thrashers scouts have no doubt noticed Kane as they checked in on fellow Giant Spencer Machacek who was drafted by Atlanta.) Kane took a major step forward this season as a 17 year old player. Using Gabriel Desjardins work on NHL equivalencies we can get a rough estimate of how his WHL scoring rate might translate into a NHL season by looking at past players who made the jump to the NHL at age 18.

What others are saying about Evander Kane

Hockey's Future talked to veteran NHL scout Bruce Haralson who had this to say about Kane:

What’s impressive to me is that he doesn’t necessarily dominate with the puck," Haralson said. "He’s not a highly skilled guy who hangs onto the puck forever. He just has that innate sense of timing and gets to the holes. He has pure goal-scoring instincts.

Kyle Woodlief of the Red Line Report (I highly recommend his annual Draft Guide) praises his "lightning quick release" and notes that his skating improved greatly over the last two years. I'm choosing to quote the negative comments because every player comes with good and bad attributes--but many people are reluctant to say bad things about a 17 year old prospect, but Woodlief never holds back:

Effort level is wildly inconsistent at times and a slight concern. Can be ultra gritty when he wants to be a force in all zones, but does a fair bit of floating too. Looked bored many nights in the regular season, but manged to step it up in big games/playoffs.

The Hockey News Draft Preview pointed out that while Kane was the final cut from Team Canada, but an injury got him back on the World Junior Championship team. Even then he was the extra forward, but his play earned him more and more ice time and he finished with six points in six games. They have this to say:

He does not fear going into the corners or to the places on the ice where he has to pay a price for scoring chances, and as he exhibited several times during the WJC, he has an impressive set of legs.

One unique attribute that Kane brings is that he is named after Atlanta boxing legend Evander Holyfield (both his father and grandfather were fans). As an African-American player Kane could perhaps provide some crossover marketing appeal to boxing fans and the substantial black community in Atlanta. While this is certainly not the primary reason why Atlanta might choose him--it is something that he brings to the table that no other player has to offer.

Atlanta is sometimes affectionately called "the Chocolate City" by African-Americans and as the home of Dr. Martin Luther King, the city holds a special place in the culture and history of the United States. Holly Gunning specifically asked HF reporter Glen Erickson to quiz Kane about the possibility of being playing in Atlanta and he had this to say:

"I did speak with Atlanta. And I suppose going to the United States, of course there are a lot of African Americans. But I would be happy to play anywhere in the NHL. If it were Atlanta, well yes, you’re correct on that note and I guess that’s all part of the job and I would be very happy doing it."

The Thrashers have consistently made efforts to bring in African-American fans, but it is fair to say that the metro area's black community remains a growth area for potential NHL fans.

Evander Kane brings a truely unique package of goal scoring, skating, physicality and cross over that would be quite exciting to watch over the next decade.