Gerald Carpenter who has done some fantastic work sorting through the various legal filings related to the Phoenix Coyotes has passed along the Coyotes internal revenue and expenses totals to Edmonton blogger MC79 who posted the totals on his site (a great site, but beware that many commentors have a significant bias against southern markets).

I have taken the totals and collapsed some of the categories down to try and provide a picture of where the Coyotes money comes from and where the money goes. The Thrashers budgetary data is all top secret, but we can use Phoenix to give us a rough idea of what various elements cost.

I've made this argument before, but now I have numbers to back it up. The biggest  advantage of a market like Atlanta (other than having 5 million people) is the number of Fortune 500 companies that purchase luxury boxes, club seats and corporate sponsorships (thank you Delta, UPS, Home Depot, Chick-fil-a and Philips).

Those big companies bring in a huge amount of revenues for the Thrashers--revenues that probably keep the team from losing massive amounts of money after going 10 years with zero playoff wins. Fans who complain about the exclusive Club Side privileges should keep in mind that someone is paying a lot of money for privilege of hot water, bendy straws and custom made pizzas. If Phoenix is any guide the Club side of Philips Arena brings in more money to the Thrashers than all the rest of us schmucks who sit in the other 60% of the building combined. The same also goes for the NHL money--Gary Bettman sends Atlanta about as much money as us non-Club fans spend on seats and food (time to start a "We heart Gary" club?). 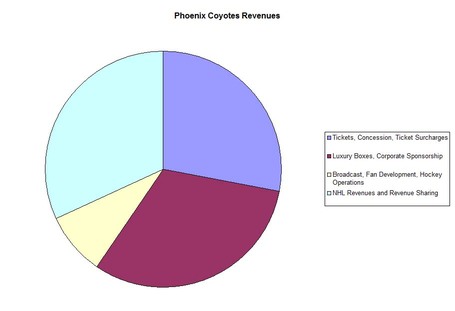 I would point out three very important differences between the Atlanta Thrashers and Phoenix Coyotes: 1) the team owns their building and gets additional revenue from parking (Phoenix had to pay for their parking) and the Coyotes had to service a massive pile of debt (the Thrashers group owns the team outright)--I have left the interest payments out of the expenses chart singe I'm mostly interested in how this relates to the Thrashers secret budget numbers. 3) The Coyotes have much higher expenses than budget numbers that came out from the Nashville Predators sale. Some of those expenses involve Phoenix owner paying himself of his other businesses--so it seems to me that they may be atypical.

A couple of things REALLY surprised me. Scouting plays an enormous role in determining the success of a franchise and yet the Coyotes spend comparatively little on this ($1.7 million). I am a data guy--If I were running a NHL team I'd want more data not less on my potential draft picks. The Coyotes have only 12 scouts--I suspect that the Red Wings probably have nearly 12 full or part time scouts in Europe alone. It seems to me that an extra $1 million spent to double the scouting staff could have an enormous payoff down the road--but then again I'm just a stats blogger.

The other thing that jumped out at me is how small the advertising budget is. In a non-traditional hockey market where there are literally one million plus transplants and/or hockey virgins--it seems very short sighted to spend so little advertising your product. (I wonder how much Chick-fil-a spends on advertising in Atlanta alone?)

Think about this for a moment, the Coyotes are paying Wayne Gretzky roughly $7 million a year to be both their coach and the face of the franchise--but they are only spending $2.3 million on advertising and promotion. Would the Coyotes have been better off reversing that and getting the best AHL coach for say $1 million and tripling their advertising budget? 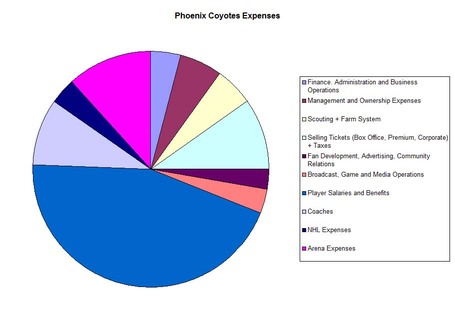 Conclusion: We will probably never get a look at the Thrashers internal budget numbers so this is about as good as it gets. So what are the big takeaways? Corporations keep your perrentially losing hockey team in the black (or at least closer to it), the NHL sends us way more money than I expected, some NHL teams make poor choices about where to invest their money (scouting and advertising).