Summer holiday weekends bore me. Every summer, Memorial Day, 4th of July and Labor are my WORST weekends of the American summer--why? All my rec hockey leagues take the weekend off. Summer holidays equals NO HOCKEY!!! And when you're a Thrashers fan your team certainly isn't playing on Memorial Day.

So in the midst of my Memorial Weekend ennui, here's my brilliant or not-so-brilliant thoughts on Ben Wight's exclusive Don Waddell interview.

There is the obligatory "Searching for  Bobby Fischer Ilya Nikulin" mention: "probably the best [unsigned European player at World Champions] is one we already own, in Ilya Nikulin from Russia." Waddell is obviously wary: "I heard again through his agent that he'd like to explore it but we've heard that every year. We'll see where that takes us over the summer."

Waddell makes the point that age and leadership do not necessarily go hand-in-hand and I agree with that. In fact, I'm encouraged by the thought that they will not target old players in pursuit of the enigmatic "veteran presence" older players are presumed to possess. But here is the part that made me cringe:

Q: With Slava Kozlov and Todd White being older players, do you think they can maintain those types of numbers next season?

Waddell: Yeah I do. First of all, they're not that old. Slava Kozlov keeps himself in tremendous condition, so I don't see any reason why they can't repeat what they did this year.

Oh boy. I REALLY hope these comments are just "feel good" thoughts for public consumption. because if they reflect Waddell's actual forecast for the 2009-2010 you should be concerned. "Father Time spares no man." (OK so he spared Gordie Howe and Chris Chelios--but only those two).

Is Slava Kozlov old or not? It's an empirical question, not a feeling. Below is a chart of the age of all 574 skaters who played at least half a season's worth of games in the NHL during 2008-09. Slava Kozlov lives way over there in the far left hand side of the age distribution--to the left of the market that reads "35". Notice just how few other guys are over there? 95% of the skaters in the NHL are younger than Kozlov and only 4% are older than him. Slava Kozlov is old for by NHL standards--I love watching him play--but the end of career draws nearer each day. 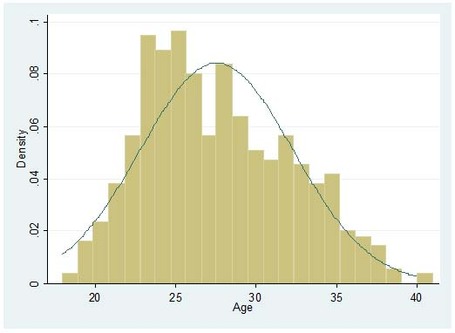 As for Todd White, he is younger than Kozlov at age 33, but 86% of the NHL is younger than White. Historical patterns suggest that most non-Hall of Fame level players really hit a wall at age 35 and Todd White will be 34 next season. He established a new career high in NHL points last year--I would forecast that there is 97% chance he will fail to repeat last season. The Thrashers should plan accordingly.

Now to their credit the Thrashers stayed away from signing too many old players in their decline phase last summer. Ron Hainsey was a good example. He's probably not going to make any All-Star teams, but locking up Ron Hainsey for his age 27, 28, 29, and 30 seasons is a strategy which is much smarter than handing a more famous 35 year old defenseman (Adam Foote perhaps) a 4 year contract.

Waddell notes that under the current CBA players are eligible for UFA status at much younger age:

Now I like that sort of thinking much better.

Another topic Ben brings up is that of other NHL teams looking to unload contracts due to cap constraints. Given the Thrashers payroll (+/- $46 million) you can't afford to carry very many overpaid players and expect to contend. But Waddell does highlight one particular situation that would prove enticing to Atlanta--a player with a front loaded contract and a high cap hit.

What is Waddell talking about? Many big spending teams (ahem Flyers, ahem Rangers) set up their contracts so the player gets more cold hard cash in the 1st, 2nd or 3rd year and less money in year 4, 5 and 6. Now under the CBA the cap hit is the same for all six years. So if you're a "low revenue" (aka poor) team like the Thrashers, if you're going to trade with a team in cap trouble you want the player who has a cap number (say $7 million) that is larger than his actual cold hard cash salary (say $5 million). If you're the Thrashers you don't need to worry about running up against the cap ceiling--so you can carry a guy with a big cap number provided his real salary is reasonable for the remaining years in his contract.

For an example of what I'm talking about, consider Exhibit A the Daniel Briere Contract (I'm not saying the Thrashers will trade for Briere, this is just a handy example of a front loaded contract.)

Now I've gone through and looked at the numbers for all 30 teams and the Flyers and perhaps the Bruins are the only two that look to be in serious cap trouble this off season. The Bruins in particular are an interesting case as they have $47 spent with 10 roster holes. The NHL minimum is half a million, so at the very least they will need $52 million to fill those roster holes. The bigger problem for Boston is that Phil Kessel and David Krejci are both due some sizeable pay raises. In the summer of 2010 Blake Wheeler and Milan Lucic will be looking for pay raises. If the GM of the Bruins called up the Thrashers an offered them the final year of Marc Savard's $5 million contract would they take it? hmmm.