Share All sharing options for: Don Waddell Interview Part I: 2008-09 Season in Review

Introduction: This interview was conducted the Monday after the final Thrashers home game at Philips Arena. GM Don Waddell arrived at the Under-18 World Championships to observe the many draft eligible players and talk with the organization's scouts. He also performed his USA Hockey duties by handing out the "Player of the Game" trophies that night (pictured below). 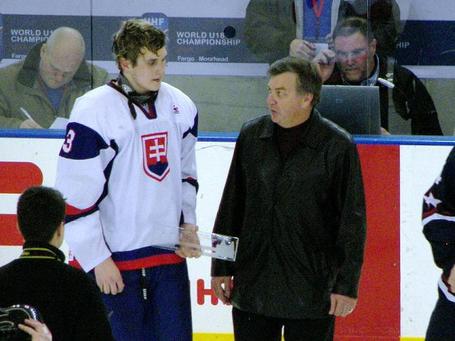 Part 1 of the interview is an overview on what went right and what went wrong on the ice in the 2008-09 season.

Bird Watchers Anonymous: It was a tale of two seasons this year. What was the difference between the first and the second half?

Don Waddell: I think it was a combination of things. One thing that can't be overlooked is Ilya being named captain. When we put that responsibility on his shoulders, not only did he take his game to another level but the guys around him rose up as well.

When you look at individual players, we didn't have Zach Bogosian a lot in the first half, once he got back...he led all rookie defensemen in goal scoring with nine. When we moved some veteran guys out it created some opportunities for these younger players to play more. I think that was a critical thing to get those [younger] guys that experience. Ilya being captain, the return of Zach Bogosian and we got really good goaltending through that stretch.

BWA: So what went wrong in the first half of the season?

DW: We will sit down and analyze our season in the next couple of weeks, but we had nine or ten new players with a new coaching staff. We knew that there would be an adjustment period, but it turned out to be much harder than anyone thought to get everyone on the same page. I just don't think everyone was on the same page--which is disturbing because they are all supposed to be professional athletes who are paid a lot of money--but we had guys that were bucking the system as we say.

[Head Coach] John [Anderson]'s style is different. He was won with it and he believes in it. That's why I hired him--he believes in what he coaches. But unless all five guys on the ice play that same system you're not going to have success because of the way the style is set up. So I think the new players, the adjustments to a new coach and we weren't getting a star performance from Ilya and our goaltender (Kari) was hurt in November. Add that all up and it makes for a bad first half of the season.

BWA: You added Rich Peverley and subtracted Jason Williams at about that same time. Was the problem that Williams just didn't fit in or he didn't play the right style?

DW: I should have mentioned Peverley when we were talking about the turnaround because his stats were unbelievable. He was playing great for us. With Jason we just never could find anyone to fit with him. Some guys you just put them in and the chemistry is there, we tried him with Kovalchuk, we tried him with Kozlov, we just couldn't find a match for him. That's going to happen.

When we picked up Peverley that gave us some options. Before he played any games with us, we knew that he would give us another centerman and we could move Jason along. To predict that Peverley was going to do what he did for us--well we could never have predicted that--but we knew he had a good skill level and he was going to get an opportunity to play for us.

BWA: What is the perfect position for Colby Armstrong? Second line or third line? Checker or scorer?

DW: I think he can play either or. I think he can play on a top scoring line in the league--the third line might be better suited for him. He's a guy who can play minutes. When he's on the third line sometimes he doesn't get the minutes. For him to be effective he needs to get minutes--you want him in the game. In the last 25 games of the season we had him playing more and he finished with 22 goals. He's a guy you want on the ice because the other team is aware of him when he is on the ice. You want to make sure he gets more than 10 or 11 minutes a night.

BWA: Going back to the second half of the season, if you look at the last 41 games the Thrashers were on pace for roughly 91 points--but 91 points still leaves you a few points short of the playoffs--so what improvements are needed?

DW: I always say it is harder to win games in March than it is in October. I think we won tough games down the stretch. I think we would be an even better team at the start of next season if we can play at the level we played at in the second half.

Also, I think this is the most points a team has had and missed the playoffs in a number of years--that's what someone told me--which is pretty amazing. But those extra points in October and November--points in overtime or the shootout--those are critical points--and we gave up some points in the last minutes--and you have to find ways to get those points in games. You'd like to think that what we did in the second half we could even improve upon at the start of next year.

[Editorial Note: The Panthers missed the playoffs despite having 93 points--which is the most point ever amassed by a team that missed in the East. iif you look at both conferences since the lockout it usually takes between 91 and 96 points to qualify for the post-season with the average 8th place team collecting 93.0 standing points.]

In Part II Don Waddell talks about what he sees as the biggest roster needs to be filled via free agency and trades and what players the team is considering for their first round draft pick.