Let me begin by saying that I am a big fan of the Coen brothers movies and the movie "Fargo" is certainly one of their best films. So I was curious to see what the real Fargo, ND would be like as I headed up to the northern plains for the U-18 tournament. 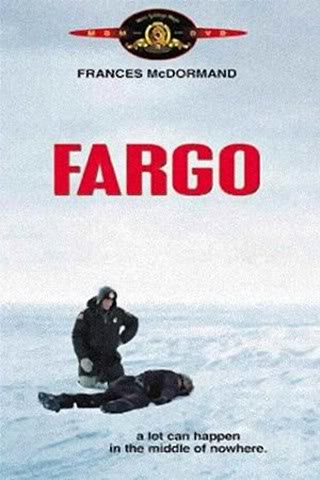 The distinctive Fargo accent and way of speaking found in the movie Fargo is for real. We had one waitress in particular who sounded like she could have been an extra in the film--it took all the self control I could muster not to throw a "you betcha" into our conversation.The locals are accustomed to much colder weater than we are in Atlanta, they considered a Saturday where it reached 59 F to be a heat wave and broke out the shorts and t-shirts. Of course, people in Fargo have the advantage of having neighborhood rinks. I swear they have one of these about every 6 six blocks in residential areas. 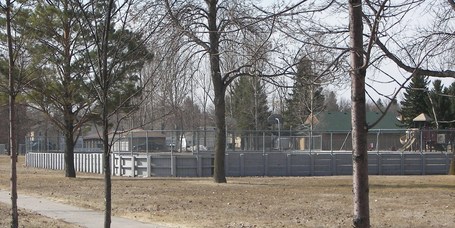 The people in Minnesota and North Dakota were very nice but a bit more reserved than in other parts of the US. The fans at both Xcel Center and Fargo-Moorhead only got noisy after goals (or when the Russian fans started chanting). People also look differently up in that area. Many people are of Norweigan, Swedish or German ancestry. On average I'd say people were a little taller than in Atlanta where the more common ethnic background is Scots-Irish-English or African.

The U-18 World Champhionships is a big story of course, but an even larger story unfolding in Fargo-Moorhead is the fight to keep the Red River from flooding the town. We stayed in the Super 8 in Moorhead and the first few days men with large earth moving machines were busy creating a massive dirt dike. This wall of dirt serves as an emergency  backup dike in case the primary barriers along the Red River fail. Fargo survived a major crest of the river about 10 days ago but forecasters were expexting another crest this weekend after a recent snowfall and then a warm spell that added more runoff water to the river. Here's a long shot of the big dirt dike, it basically filled up one entire lane of a two lane North-South road next to the river. 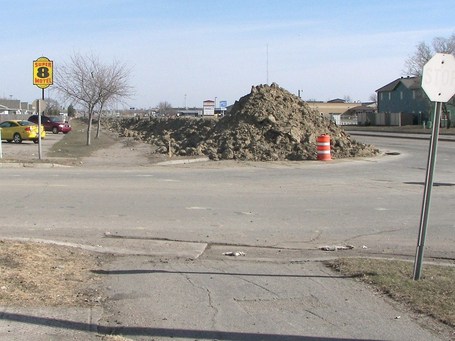 Here is a close up with a car to give you a sense of how big it is. 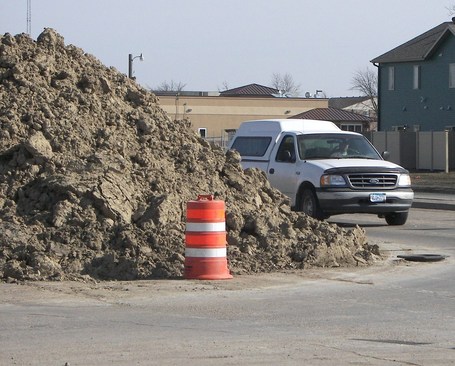 We drove into town and there are several river crossing near Main Street. The river was already perilously close to the bottom of these local bridges. I walked out on one of them and took a shot of a parking garage where one end has become completely submerged.

Here is a close up of the bottom of the stairwell and a stop sign. 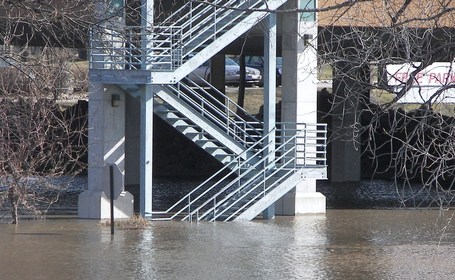 I talked to many local people who seemed to be taking the whole crisis in stride. They canceled school for two weeks and everyone helped making sand bags and building up the barriers. Even the players of Team USA spend an hour filling sand bag in symbolic gesture of support.

The U-18 tournament was played at two arenas. The Moorhead Sports Center (pictured below) was essentially a very nice high school arena adjacent to the high school. The European teams used this rink as the bigger Urban Plains Center was designated for games involving Team USA and Team Canada presumably because they hoped to sell more tickets when those two were on the ice.

The Urban Plains Center sits in the middle of a giant open area of dirt right now. The plans are for four additional rinks to be constructed around the big UPC for a state-of-the-art hockey tournament facility. When finished it will be very impressive but right now it looks raw and unfinished.

The inside of the Urban Plains Center is outstanding. The concourses are wider than some old NHL buildings, the concessions are cheaper and every seat has a good view of the ice. 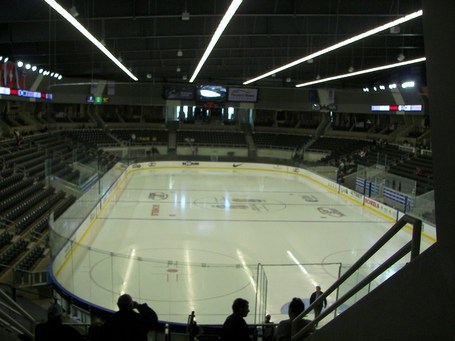 The view from press row (pictured below) was simply terrific. I sat on that white rail below the big "Urban Plains Center" sign and I can't imagine a better location for covering a game--most NHL press boxes are way up top of the building. 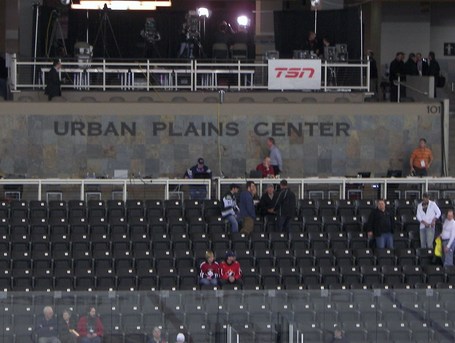 Finally it was very interesting to see the scouting community at work. I was surprised at how few notes they seem to take. Especially in the USA, Canada and Sweden games where there are many players eligible for the NHL draft some of them appeared to just rely on their memory to keep track each prospect. 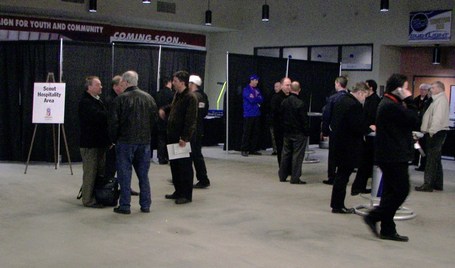 Overall I must say it was a great trip for me. I had a chance to see a major international hockey tournament featuring many players who will be drafted this summer. I had the chance to chat with a few scouts and interview Atlanta GM Don Waddell and Director of Amateur Scouting and Player Development Dan Marr (these will be posted next week). I also found out that it is harder than it looks to cover a big event as press.  Back-to-back games with interview spqueezed inbetween keeps you busy, and then sometimes the guy you planned on talking to gets injured and you have to quickly shift your plans. Or your camera battery runs low.

Finally, I owe some people a word of thanks. Thanks to USA Hockey for granting me a spot on press row and making it possible for me to talk to players and coaches. Thanks to all the players for doing interviews (Rajala, Lynch, de Haan, Erixon, Bourque) and to the head coaches who talked to me. Thanks to all the Fargo and Moorhead volunteers who helped me out. Thanks to Don Waddell and Dan Marr for answer my questions. Thanks to my friend Jen in Atlanta who looked in on two lonely cats. And finally thanks to the friend who first suggested that I attend this event--I really enjoyed the experience.

For those of you still interested in the U-18 I'll be posting the rest of my player interviews over the next few days and then the interviews with Thrashers next week. You can watch the rest of the games yourself over at www.FASThockey.com--be your own scout for a week.