Islanders win the NHL Draft Lottery, a lot of disappointed people in this building I'm sure. In between games I interviewed the Thrashers Head of Scouting and found time to consume the greatest concession not sold in NHL buildings...the legendary "Taco In A Bag" which we need in Philips Arena. 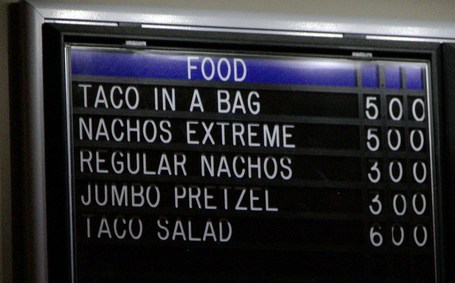 Russians had a skating practice. I was surprised at how hard they skated on a game day. Here they are collecting pucks after practice. 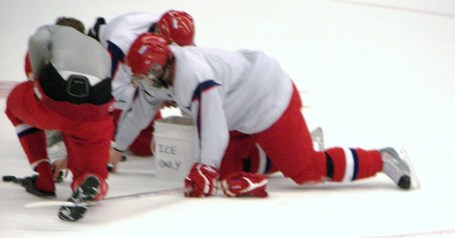 We are underway in the 1st here in Fargo, ND. Teams feeling each out a bit early. No glorious chances yet.

Nieto just missed Shore on a 2>1. I found out that Nieto is a California kids who started out playing hockey on roller skates--I'm totally rooting for him to make the NHL someday.

Russians with a SH chance--not a great one. US on the PP because Russian forward Dvurechensky takes a penalty--I've been very underwhelmed with him so far this week.

Ankudinov with a good shot from top of the circle.

Russian fans are getting all boisterous while YMCA is playing during TV time out.

Orlove just tried to tatoo a US player, only got part of him. Did I mention that Orlov has impressed me, he has speed to burn.

Americans with a good chance, I didn't see who had it. Russia in the box, USA on the PP. Tarasenko with the clear. Kitsyn busts up ice SH and is hauled down. 4 on 4 now with Russian PP coming up.

Ramage with a turnover at blueline but nothing comes of it. Russian takes interference call (Chvanov). Russian trip makes it a 4>3 PP now. Fowler point shot just missed the post. And now Americans trip up Russian after they turnover the puck at their own blue lie. FOLKS WE HAVE 3 ON 3 HOCKEY (Gary Bettman is smiling somewhere).

1-0 USA point shot slapper by Wrenn with D'Amigo providing the screen in front.

Treais shoots, follows his shot gets rebound and shoots again, USA gets a third shot off in that flurry. Treais is not someone I came to watch but he keeps doing good things that I notice.

2-0 USA Chris Brown goal. Bad one for Russian goalie. Brown is skating parallel to the goal line--skating away from the net--does a little spin-a-rama and throws at the goalies feet and it goes in.

Tarasenko gets a step on Merrill and ends up drawing a PP for Team Russia. Chvanov gets a nice backhand shot off in tight. Sergeyev snaps off a crisp point shot that a USA player blocks. D'Amigo bull dozes his way to a PK zone clear and takes it all the way down the ice to kill off the period clock.

1-1 Russa scores. Awesome pass by Zaytsev springs Kuznetsov for a clean breakaway--he stays just one step ahead of US defenders and finishes off the chance. This Kuznetsov is going to be a high pick in 2010--he's more impressive than their 17 years olds.

PP Russia but they are careless with the puck making two poor passes that allow the USA to stop their advance. A thrid bad pass results in a partial breakaway for Ryan Bourque and he draws a penalty on the play.

Random note: USA is selling a lot of tickets in this building looks like a near sell out today. The scouts are having to actually sit in the assigned scout area.

American nearly bounces one in off the Russian goalie from behind the net, some of the pro-American crowd thought it was a goal.

2-2 Russia scores. Tarasenko drives right to the hash marks with the puck and fights off US defender and rips it high for a goal. Russian fan section is chanting--my Russian language skills are not great but I swear they saying "yes, we can!" and now the reserved locals breakout int "U-S-A" for the first time.

USA PP now, D'Amigo to Shore for a great looking bid, Bobkov (goalie) had no idea where it was, he looked behind him as it squirted out sideways.

Now we have a full on chant war as the small but vocal Russians stire the passive Americans to a full throated cheer.

Americans killing 5>3 PK for 2 minutes after a clearing the puck delay of game penalty. Two good point shots for Russia, but htey're nto workign it down low at all so far despite having 2 extra men. Broken play tip shot, grat save, puck back out for another Russian point shot. American PK must be very tired by now. Save and now an attempted fight in the slot. US goalie never really covered the puck in my opinion. Russian goes to the box for 4 minutes, so now it is a 4>3 for 20 seconds and then an extended US PP.

3-3 Morin scores a pretty goal as he rotates across to the back door sice adn D'Amgio finds him and he rips it high to tie the game. Very loud response for this goal in the building.

Fowler with a great shot right off the faceoff win from the circle/hash marks area.

This has been by far the most compelling game so far of the week. The building is full and into the game and two teams appear evenly matched.

Start of the 3rd.

Orlov just put on a skating clinic as he circled behind his ownnet and then shot up and went end-to-end, lost the puck, regained teh puck curled into the offensive zone and was checked off the puck. Great skills but he needs to remember to make a pass once he gains the offensive blueline.

Brown crashed the net and everything but score. The puck goes behind the net and comes back around for another high quality chance--Russia takes a penalty in the mash up. Orlov and Tarasenkov get the clear. US crashes the net and the net comes off. US players Shore penalized but one Russian (?) got a good lick on him.

4-3 USA PPG. D'Amgio chip pass to Ryan who just shovels it five hole. Russian goalie failing around and does not look confident.

4-4 Russia re-ties it. Tarasenkov scored and I missed the play. This game just won't quit.

USA has a huge crash the net moment where about 4-5 players hit the ice.

5-4 Russia Scores. Tarasenkov hat trick. he steals a poor outlet pass for a 100% clean breakaway throws a couple of fakes and goes backhand to grab the lead for Russia.

What a phenomenal game. The lead has gone back and forth. Both teams looked like they might pull away only to have the other team come storming back.

6-4 Russians get a quick one right off the faceoff, with just under 4 mintues to go that probably salts this one away. Goal by Kitsyn.

6-5 Shore zips up through center with a huge amount of steam and just rips one up high from the hash marks to pull USA within one with a minute plus left.