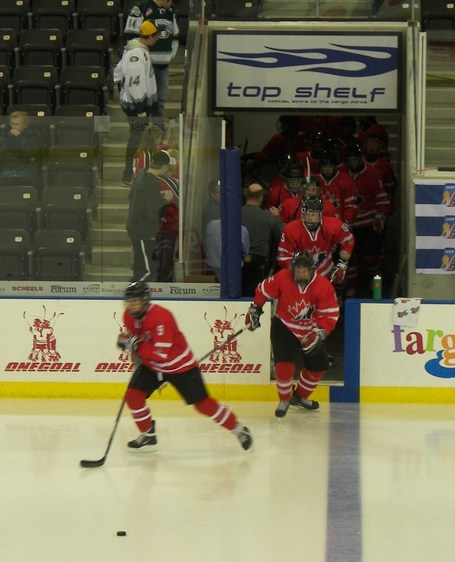 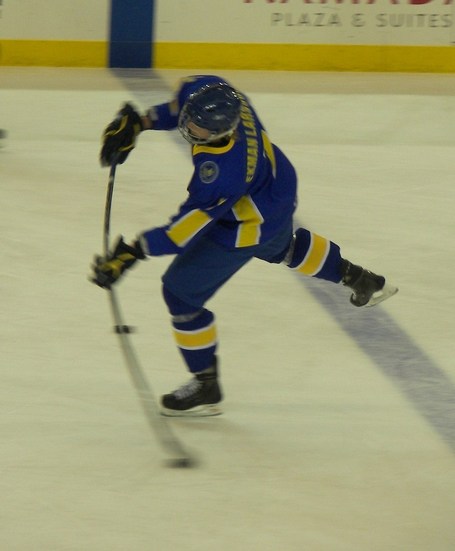 Fans of Sweden are here. 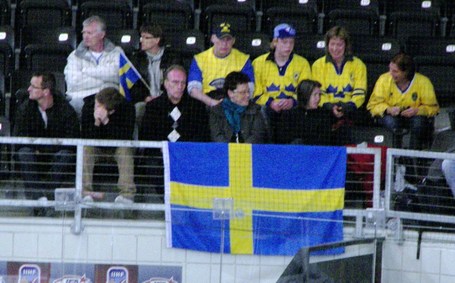 Fan of Canada in "full Ovechkin All Star Game" mode. 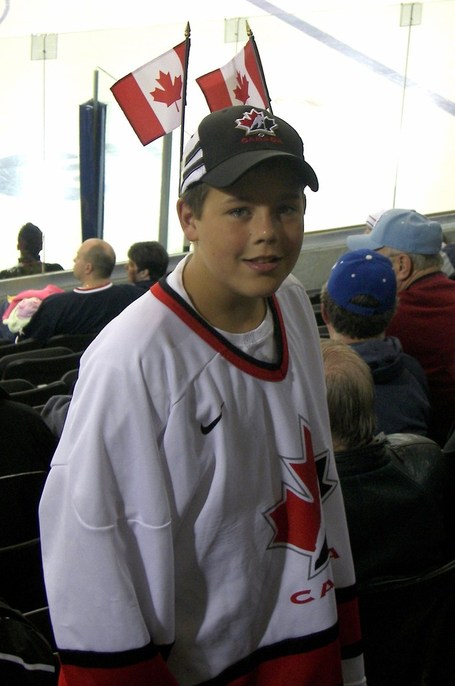 Pretty even game so far. Swedes had one power play.

Canada still struggling to put together 3-4 clean passes in a row.

PP for CAN now, but Canada's puck skills problem being exposed by Sweden right now.

Another Canada PP a couple of perimeter shots.

Sweden has a so-so chance with a rebound jam around the net. Still scorless.

Physical intensity picking up with both teams attempting some big hits.

MSP nearly had a tip-in chance but the pass was not perfect.

Canada with an almost chance as they get a 2>1 across the crease after SWE D misread the play.

Game reminds me a big of watching Red Wings (Sweden) crisp tape to tape passes keeping possession of the puck versus more of a forechecking team. The problem for Canada early on is that Sweden simply has the puck more often and when they dump and chase the good skating Swedish D get their quick and make solid outlet passes to avoid turnovers.

1-0 Canada. Point shot goes to the net and rebound other way right to Froese for an easy put back. Swedish D Bertilsson totally lost track of his man when turned to look out at the blue line

2-0 Canada now. One Swedish D dropped to the ice to block the pass from the corner (he failed), the backside D lost his man (Mitchell) who drove center slot and had a beautiful one time deflection.

Sweden was out-playing Canada--then made two costly coverage mistakes, to their credit Canada made them pay. But as soon as the goals were scored the puck has gone back into the Canada end and stayed there.

1st period ends 2-0 Can, Shots are even at 10 each. Wish they had a time of possession stat becase that certainly wasn't even. Can the Swedes recover their mojo and get on the board?

Start of 2nd, refs and players have hit the ice. I noticed that Landon Ferraro was not dressed today. I was planning to interview him after this game--that might not happen now. Froese and MSP lead their respective teams with 3 shots each.

Connolly with a nice steal but he carries into Offensive Zone corner and nothing comes of it.

Too many men Canada, SWE PP now. Eakin with good PK shift, hard work leads to clear. Swdish PP gets 3 point slapper, the third produces a hard rebound off the end boards which is knocked out of the air by Landeskog.

If you're never seen this guy Jofeson play he is very slick with the puck. He reminds me of a poor man's Kovalev (but with fewer stupid turnovers).

3-1 Canada. Swdish goalie gives up a squib rebound to his left and an easy put back for Hishon.

Wallen for Sweden looks good to me and that Gudbranson could be a real NHL horse when his body fills out more.

Another instance of Sweden's D not really marking their opponent or tying guys up when there are loose pucks at their goalies feet. The coverage around the net has really hurt Sweden today.

O'Reilly just had a nice shift for Canada--he was aggressive and showed some skill with the puck as well.

3-2 Sweden scores. Point shot on the PP cleanly beat the Canadian netminder. Landerskog with a nice screen of the goalie right before the shot was fired by Jarnkrok.

I wish I had a camera with wide angle lens to show you all the scouts sitting around here. Probably 100+ and I swear that every single of one them is in a black jacket or black coat. The woman at the credentials table said 200 of them have checked in so far this week.

Bertilsson with a hit from behind creates a 5>3 PP for Canada for 1:31. Very weird 5 on 3 PP for Canada the D, de Haan and Olesen, just passed it back and forth between them while the F just stood around waiting for something to happen. A lot of time was wasted on this. When the forwards finally got the puck Kassian put a hard shot on net and a Canadian got a shot off down low that just missed the far post.

McFarland with a great chance high slot that just hit the Swedish goaltender.

Swedes are back on their heels a bit after that extended PK, they seem less aggressive giving the Canadians more space.

End of 2nd socre is 3-2 CAN and shots are 21-2 CAN, much better time of possession for CAN this period. 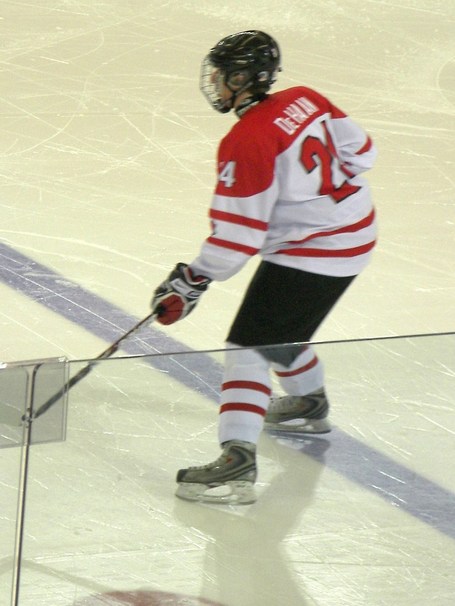 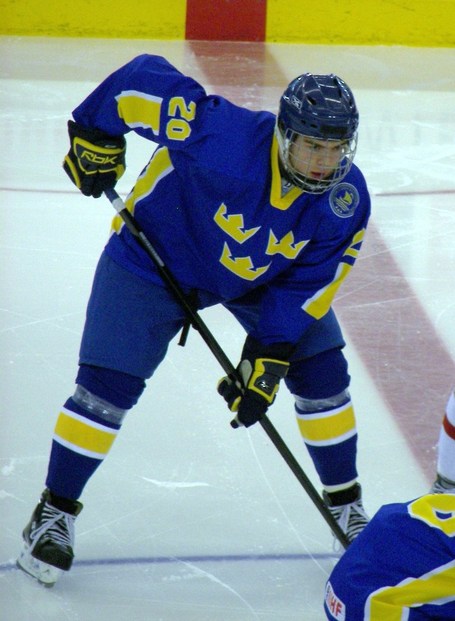 Third period under way. The Swiss are up 5-2 on Germans.

Sweden kills off CAN PP and now Sweden has the man advantage after a clearing the puck over the glass by Despres. Klingberg with a good shot with lots of traffic in front on CAN net. O'Reilly and Clifford with strong PK plays for Canada as they kill it off.

Sweden nearly ties as the puck takes a Swedish bounce in the crease, but the Zador twists and squims his way to a couple timely saves to preserve the lead fo red and white.

Kassian bursts across blueline and gets a good looking shot away that doesn't miss by a whole lot.

Hishon hits the outside post on a low shot that squirts through Lehner's 5 hole.

de Haan with a wobbly Swedish goalie and the puck on his stick choose to pass instead of shoot--bad choice.

With 2 minutes to go and a Canadian icing, Sweden takes timeout to plot strategy. MSP almost connects with an OEL pass for a good bid. Sweden pulls netminder. Ekman-Larsson pinches in and throws to net but Sweden can't fish the puck out of a sea or skates and they clear and get the EN goal. 4-2 CAN game over man.