A bonus of having the U-18 Championship here in Fargo, ND is that the USHL playoffs are also taking place this weekend. The local Fargo Force are up 2-0 on the Omaha Lancers. Why is any of this significant to NHL fans? There are 8 players taking the ice tonight who are considered likely to be drafted this summer in Montreal. 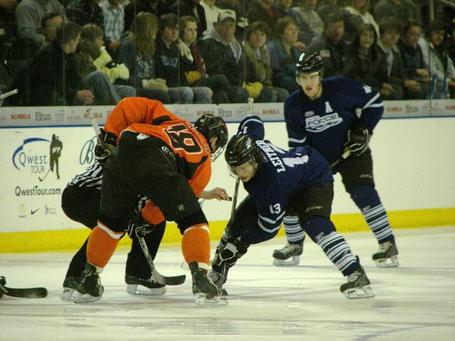 The USHL is the best American junior hockey league. It is not quite on par with the three major junior Canadian leagues but it does feature solid players who go on to become NHL players. A very large number of USHL players play a season or two at age 16 or 17. In the USHL they are able to keep their amateur status and then go on to play for NCAA Division 1 hockey programs.

Now if you're an Atlanta fan, the Thrashers have a strong tendency to take young players who have committed to go to top NCAA college hockey programs. So between watching the US National Development team last night and watching 8 ranked USHL players tonight there is a very good chance I'm seeing a couple of players who will be taken by Atlanta this summer.

Omaha features Louis Leblanc who is rated as a mid 1st rounder by both the Internaional Scouting Service (an independent scouting agency) and the NHL's Central Scouting (mid season rankings). Each team also features a goalie who is likely to be drafted as well.

Home team Fargo takes an early 1-0 thanks to a steal and SH breakaway goal by Taranto. For a team trailing 0-2in the series like Omaha that's a huge momentum buzz kill.

Omaha got a 5>3 PP and Matt White rips one off the crossbar to tie the game 1-1.

Momentum shifts back to Fargo as they get a power play and Luke Witkowski absolutley ripped a slapper from the blue line. 2-1 Fargo Force.

In the 2nd period highly rated Louis Leblanc scored a spectacular goal on one knee to knot up the game at 2-2.

At the end of the 2nd we have numerical symmetry all around as the score is 2-2 and the shots are 22-22.

Two minutes into the 3rd Omaha takes advantage of Frago penalty and graps the lead 3-2. Kristo the point man snagged a long rebound and had lots of time to pick his spot and scored.

Mid way through the third Fargo storms back to tie it. The Leiterman cut behind the net and sucked the defenders towards him, he then threw the puck right into the crease where Chris Stafne made a nice quick one timer to finish off the chance.

Omaha had three terrific looking chances with about three minutes to go. But in each case the Omaha players fired wide or right into the goaltender (despite there being a LOT of open net available in each case). Fargo goaltender Lee looked shaky but Omaha just couldn't execute. Tied at the end of regulation.

Andy Taranto scores a PP goal about 5 minutes into OT. It was a play that came from behind the net and Taranta put it home and was immediately mobbed by his teammates. The somewhat reserved home crowd went wild as Fargo sweeps Omaha and advnaces to the next round.