Share All sharing options for: Day Four: Russia Versus Norway 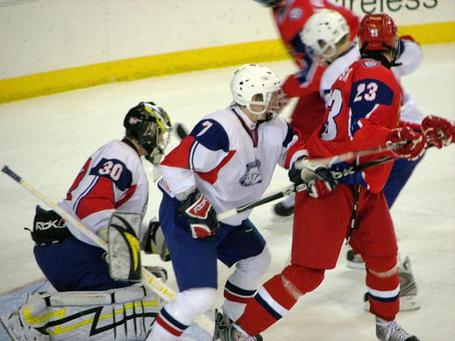 A light schedule today at the 2009 World U-18 Championships with just two games taking place and many of hte marque teams resting. I'm here at the Russia vs Norway contest at the Urban Plains Center. Russia is heavily favored in this one.

The Russian squad is not their best possible team. The are missing some quality prospects and the Class of 2009 is a bit weaker than usual. They do feature a number of young players who will be eligibile for the 2010 NHL Draft. Kabanov and Kuznetsove in particular look very goo so far.

Russia up 1-0 on a PP goal. Zaytsev scored easily. He was parked in the high slot all alone and received a pass and picked his spot. Norway's Volden had no chance.

Total domination by Russia right now. They made it 2-0 with a slap shot from just inside the blueline by Andrei Sergeyev and then 3-0 on another slap shot by Burmistrov (2010 guy) who wired from the top of the left ciricle.

Now Kuznetsov just blew around a Norwegian defender, cut towards the right post and flipped a backhander over the sprawling goaltender. The shots on goal are now 12-0. Team Norway did have one nice chance that was put wide and therefore doesn't count as an offical shot.

Team Russia adds two more in the second. The 6th goal was a roof shot off a pass--the poor Norwegian goalie had absolutely no shot at stopping that play. 6th goal is negated after video review.

In the third period Kuznetsov gets a clean cut breakaway and finishes off the chance to put Russia back up 6-0, shots are now 38-16.